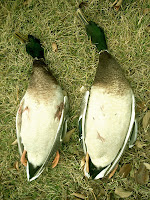 Long, long ago, I wrote this post about my thoughts on wild goose and duck. Over time, a number of folks have weighed in to disagree with my feelings on the subject. One, whose opinion I respect, inspired me to reform my ways. So yesterday, when I had the opportunity to take a couple later-season mallards – I took it.

So these two are plucked. First big change. I grew up breasting waterfowl. Plucking wasn’t as bad a job as I’d guessed. The wing areas are a little brutal, but for the most part, I was pleasantly surprised. Would I want to do 30-40 of them this way?…two, yes.

Secondly, and perhaps more importantly, they have fat. Not because I left the skin on, but because of the time of year they were harvested. When we normally start bird hunting in early September, waterfowl are JUST coming off a diet of marshland plants and such. Crops get knocked down, the birds find the food, we go in and hunt them pretty much asap. So unilke the norm, today’s birds have had a chance to fatten up on grain over the past two months. Was there fat? Yes. Finally, I witness fat on a game bird. Will it make a difference? My guess is yes, but we’ll see to what degree.