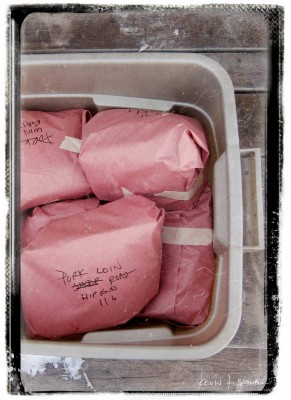 Interesting question came up this week on Twitter in response to my writing about the economics around butchering your own beef. The question was, how is somebody with limited space supposed to go about butchering and storing an animal?? Fantastic question. And I get it. I show pictures of quarters hanging in my cellar [convenient, but unnecessary], butchering in my garage [did elk and beef in my kitchen this fall], etc. What it boils down to is butchering an animal doesn’t have to take much space, and can be tackled by the downtown condo dweller with the gumption to do it. Here’s an example.

In this rubbermaid bin is a side of pork I cut last night. Started at 7pm, was done by 9ish [hey, that’s not much time commitment, is it?]. It was all cut on a counter space the size of a dining room table. That entire side of pig, albeit not the hugest of pigs, resides in the bin you see right there. Doesn’t even fill it. Having lived in an apartment condo a few years ago, I’m rather kicking myself for not knowing this before, because I’m quite sure I could have dealt with a side of pig with a standard fridge freezer and some planning. For example: rather than freeze the fat, simply render it the next day and toss it in the fridge. Rather than do large bone-in cuts, de-bone it. Plan to make a batch of sausage the day after butchering, which would relieve the freezer of a 5 lb bag of trim. Partake in our new family tradition of doing a pig head roast the day of [most pigs come sans-head anyway if that grosses you out]. And if all that failed, I could have easily found a friend to split it with, in which case I’d have had loads of room for a 1/4 pig. Our next door neighbours had a small apartment sized deep freeze, solving their storage constraint.

Turns out this pig was raised by a friend of a friend of a friend, who happened to have too many pigs for their winter barn. Figured I’d grab a side to do some charcuterie experimenting with. This pig side cost me $80, and it wasn’t the first opportunity I’ve had at an extremely inexpensive pig. $80/roughly 60 lbs = about $1.33/lb. I challenge you to compare that to Walmart’s pricing. Not suggesting cheap is king, just that if cheap’s your barrier to local food – or space – there are solutions. 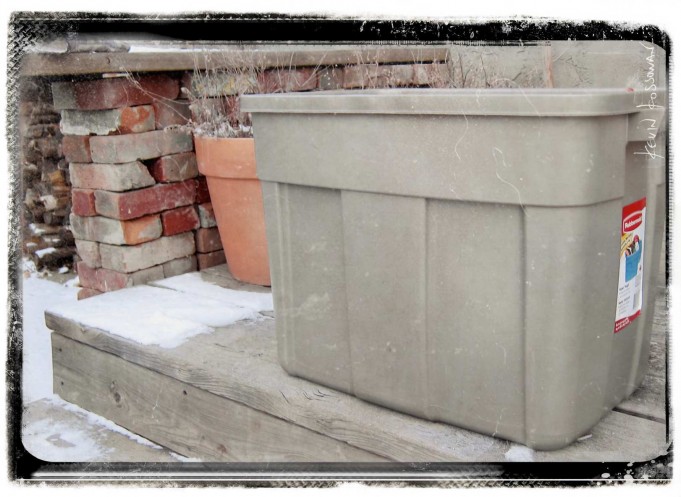 9 Comments on “About This Much…”