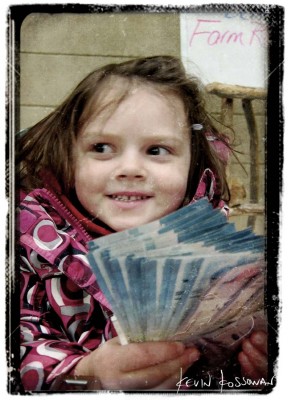 Okay, so I was missing out. The City Market Downtown had closed for the season, and although Old Strathcona is an option for some farms, the long waiting list leaves the rest to sort themselves out. I really have a hard time getting my head around how farmer’s markets operate, to be honest. From what I can tell, politics, protectionism, and profit too often rule the day at the expense of mutual good not only in the farming community, but for our local food system that the vendors rely on. I digress.

Having had good intentions to follow some of our fav City Market vendors to the Alberta Ave Market, we finally made it out today. And I’m kicking myself a bit for waiting this long. Why?

Christine at Shooting Star Ranch is a fantastic lady. Having started in the elk antler business, they now also sell their meats to Planet Organic. I left with a couple elk ivories in my pocket – a Christmas gift my oldest daughter was supposed to keep secret. What? You didn’t know elk had a pair of ivory teeth? They do. I’m not kidding. Christine also turned Eve into a greedy capitalist while we were there [see photo]. They’re selling meat cuts, sausages, jerky, etc – my pick being the small pack of tenderloin for $6.50. Bargain. Just don’t overcook them. 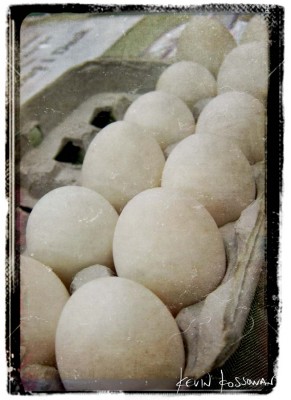 Next reason: eggs. I missed our regular supply of awesome fresh eggs. I can go to a posh grocer to pay too much for relatively fresh and good quality eggs, I know – but I mean fresh eggs. In case you didn’t watch the From Local Farms episodes referring to egg freshness, check this one out. I was really relieved to hear from two local egg producers that eggs can be in the conventional distribution system for 3-6 months. I thought I was just being a snot complaining about runny watery egg whites from the box store. Turns out those watery eggs were nearly as old as the calf moose and beef we harvested this fall. Yuck.

In a bit of overkill, I loaded up on duck eggs from Red Barn Pekin Ducks [seen in picture, and a bargain], Green Eggs & Ham, and chicken eggs from Ma-Be Farms. Perhaps I over did it, as I’ll be back next week, but I know that I won’t be holding them for 6 months, so I’m not too worried about the freshness going south if I have to sit on them for a while [no pun intended]. For the record, the Red Barn Pekin Duck eggs have seriously goopy whites. Goopy sounds bad, but as the antithesis to the hated-runny-white, goopy in this case is fantastic. 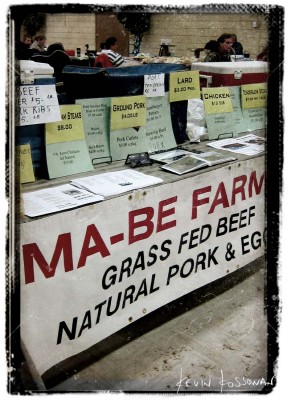 Ma-Be Farms. Never heard of them. They sell so much variety I didn’t know where to begin chatting about their products. So I bought eggs – $3/dozen. Then we chatted bison. Turns out they have to sell their bison at $10/lb, as if they can’t charge that, they are better off selling it to foreign markets who will pay that or better. I was glad to run into another farmer [first one, John Schneider of Gold Forest Grains] who, in the face of the easier, profitable route of selling abroad, chooses to work harder to keep their product available to locals. Well done.

They have grass fed beef that are finished on grain. They have pork. And lastly, chickens. Pastured chickens whose pens are moved daily. I was shocked. Although you see it around [Serben Free Range, Sunworks, Nature’s Green Acres], it’s still not the norm. $15/5 lb bird. Again, bargain.  He offered to hook me up with Hutterite chickens that were significantly larger for the same price. “Are they raised the same way?”. “No, they’re barn raised”. I told him I’d be willing to pay far more for his pasture raised birds than for barn raised birds.  We fell in love with Nature’s Green Acres’ birds this summer, but they’re long sold out. So next week, I’m picking up some chickens from Ma-Be. 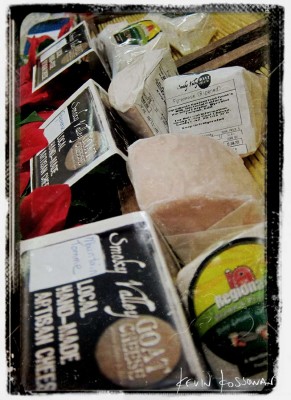 Then there was Smoky Valley Goat Cheese and Green Eggs & Ham – two producers from the City Market that we miss dearly in winter. Holly had a new ’bouton’ version of the St. Maure, and Mary Ellen had a surprising amount of lovely greens [baby kale, arugula, mustard greens] given their recent greenhouse freeze up.

I have a CSA share with Smoky Valley Goat Cheese and am a Futures member with Green Eggs and Ham – both worthwhile programs that I’ve enjoyed thoroughly, and have even given as gifts. And speaking of community ag, I happened to run into the nice lady who heads the Alberta Ave Market, Carrie [sp?], who is busy organizing one of the coolest community garden concepts I’ve heard of: getting neighbours and friends in the community to grow produce in their yards for sale at a community table at the Alberta Ave market. A market booth of neighbourhood yard food. Brilliant. This is the kind of meaningful innovation in food that gets stifled when markets get too big. I dearly hope they pull it off, and already offered some of my excess herbs for their table next season.

So while the Alberta Ave Market is indeed small, we had a great time on our first visit, and will be back. What it lacks in size it has in intimacy and small-town vibe. And now I don’t have to eat crappy eggs through the winter.