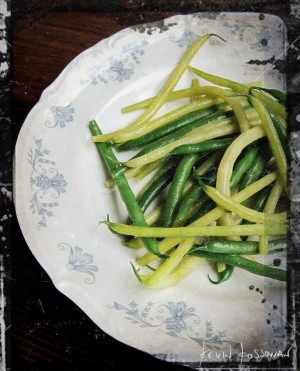 It’s a little sad that the leaves are starting to change colors. We only start getting them in May up here, so seeing signs of their departure only 3 short months later somehow seems unfair. But those signs also are indicators of extremely exciting things knocking on our calendar’s doorstep: garden harvest, fruit harvest and winemaking, shaggy mane hunting, butchering season, and hunting season. But the precursor to all that action is a solid month of serious abundance from the garden. So while the signs of change surround us, we drown in garden produce as nearly everything, for a short window, is in season. It’s a glorious thing.

One of my favorite things to do at this time of year when guests come over is to base a menu strictly on produce from our yard. A recent such menu included garlic, jerusalem artichoke, potatoes, baby leeks, herbs, onions, carrots, beets, tomatoes, purslane, chard, celery, squashes, and a personal favorite – bush beans. I went outside recently to harvest beans, figuring I’d get at them before they got ahead of me. I unintentionally picked exactly, down to the gram, a kilo. That’s a lot of beans. And as I write this, I’m figuring another kilo or more likely awaits me this morning. Bush beans are one of those items we do without all year, eating them only in season from the garden, which likely contributes to their awesomeness when their time does come. They are magnificent super-fresh. Although doneness is pretty key when cooking them [taste them as they cook], simple preparations with some salt and butter are all I need to have a silent moment of bush-bean-bliss.

The markets too, teem with abundant August produce – so if you’re gardenless and not drowning in your own, get out to the next market near you and drown in the abundance of local farms!!! But you’d better revel in it soon, as up here, what Andreas calls ‘the big white combine‘ [frost] cometh. And when it does, many joys screech to a halt for the year. Happily, others take their place. And round and round we go.