I just had dinner guests do a blind tasting of two different species of geese to tell me which they preferred. Both were rotisseried, basted in garlic butter with fine rosemary, thyme, sage, and parsley. The final concensus: both were extremely close in flavour and nearly impossible to distinguish one for the other. And both tasted so much like roast beef, that it was agreed either could be passed off for roast beef.

And all agreed that the rather expensive bottle of 2003 Nicolas Potel Bourgogne Pinot Noir was really damn good.

The main course was a sauté of wild boar with a Madeira jus and lardons of bacon I made, served with roasted garden potato, carrot, and rutabata, and sautéed chard greens with nutmeg and lemon.
Which leads me to a rare event. I was mad today. Doesn’t happen often. I had a 5 lb bone-in leg of wild boar that a friend gave me, butchered by a local butcher. I had been anticipating enjoying it for weeks. I opened the package, it looked poorly trimmed, so I cut into the roast. 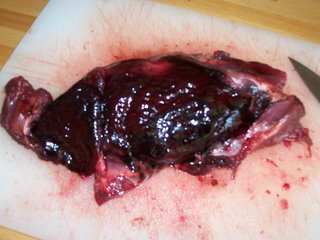 This is the absolute worst piece of butchered meat I’ve ever seen in my life. That is blod clot, running the entire length of the inside of the roast. It was disgusting. After trimming, I was only left with just under 2 lbs of edible meat. That’s just wrong. Whoever let this leave their shop, should be ashamed.