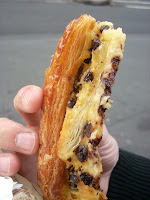 I never thought I’d write this, but I have to admit that ever since a wonderful pastry shop finally opened up in our town [ICS], I’ve been jaded about eating pastries in France. It’s a loss I’m having to deal with. ‘Not bad, but I can get it better at home‘ is a thought I wish upon nobody who loves to travel and eat. Very similar to making pistachio gelato better than I’ve had it in Italy. Blissful disappointment.

That said – France not to be outdone – showed me two new favorites that I had no idea exsited. Starting with #2 favorite: the Suisse. I had many after the one in the photo [Paris], but this one was the best. Kinda creamy [custard?], chocolate chipy, and croissanty. I’m a fan. If anyone knows how to score one in my province, please advise. 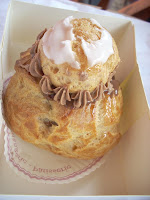 #1 spot, however, went to the Religieuse. The one in the photo had been abused by the box. But it doesn’t matter. It’s a marriage of pate a choux classics: an eclair ball topped with a cream puff. Genius. This genius happened to me in Eguisheim, Alsace.

I owe a debt to both of these items and the people who made them. Perhaps I need to go on a gelato quest to restore my faith in that department.