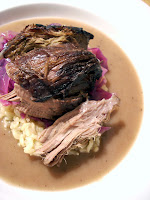 Calf Ribs were the first thing on my agenda with the fresh calf moose this season. I’m glad Phil appreciated the post. On deck: bone-in shank.

I’ve ccoked a few beef shanks over the past few months – it even appeared at my 30th birthday party. So when it came to butchering the calves this week, I decided to take the shanks whole and bone-in – to try using them as I would beef. 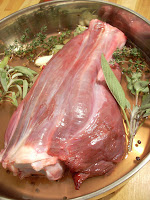 Victory #2 occurred in the kitchen. I have finally confirmed that moose shank has very similar properties to, and is just as enjoyable as, beef shank. I’m so pleased with myself. 3 decades I’ve eaten moose. And I’ve never had shank done right. Borderline ridiculous.

So that’s two for two on the bone-in cuts this year. Had I not taken them, the pull-apart-goodness would be tucked away in a pack of ground burger somewhere, and the ribs would have been enjoyed by magpies and an eagle.

Method
Add all ingredients to a pan or ziploc and marinade the cut for a day. I did it for two, flipping it each day. Once marinaded, you need to dry it, and reserve the marinade and its ‘stuff’. I set the shank on a rack over a baking sheet and tossed it in the fridge for a half-day.

Next step: sear it. Season like you mean it with salt and pepper. Get a couple tbsp of oil hot in the braising vessel and brown the shank over medium heat. Be patient, don’t burn the stuck-on-bits, and go for a good brown. Preheat your oven to 300F.

Next step: add back the marinade, and enough water to come half-way up the meat. Cover tightly – I used foil. Into the oven it goes. For 4-6 hours. It should be pull-apart tender, but not mushy. Feel free to check it.

I made a gravy with the cooking liquor, and served it with brown rice pilaf and red cabbage. Next time, I’ll be using rosemary, jacking the sauce with black-currant jam, and letting a bottle of bordeaux breathe for a couple hours before dinner.