We’re going to remember the 2009 season for a long time, for the absolute opposite reasons we’ll long remember 2006. On my 2006 hunt, we saw 67 moose in two days – which was remarkable. This year, in two days, we saw 2 moose. Two. Just under 3% of the action we had only 3 years ago. Our best guess why is that there was many, many feet of snow in 2006 which made for a tough winter for big game. They also let out a whack of calf tags, and are still doing so, despite the fact that the numbers have tanked. By 2007, it was already tough slugging, and we simply got lucky on the last couple hours before we were slated to head home. Last year was extremely lucky on getting my calf on the first morning out. We only saw a couple moose last year – just happened we got the right kind, in the right place, and things worked out. That almost happened this year again – within the first couple hours of hunting, we had a calf in a chunk of bush 100 yards square or so. 3 guys to make a maneuver. We made our move, and despite a half dozen mule deer nearly bowling me over, taking the route we suspected given the wind and the direction of the guys pushing the bush – the calf took the only way out he could have to be safe, and I passed on a 300 yard running shot quartering away.

So into the bush we went on quads. Hardly any moose in the farmlands, had nothing to lose by hitting the bush to see if we could improve our luck. No such luck. We spotted a few, but sign was sparse, and the opportunities didn’t present themselves. Until the last morning, again, a couple hours before heading home. I pulled into a cut block, and had a moose to my left. After hours and hours of looking for them, when you do see one, it’s hard not to freak out inside. But I feel I held it together pretty good. I let the quad roll to a stop behind a big pile of timber so I was out of sight, leaving the engine running as I was instructed to do by my guides. Got my scope on the moose. Looked like a calf. Had to check with binoculars to be sure – shooting cows is illegal up there. When I looked up with the naked eye I could see the cow to the right, clearly larger, so I indeed had been looking at the calf in my scope to her left. Up went the gun, a slight step left to rest on the timber for a steady shot. Got the moose in my scope, and watched them running into the bush. I’m not one for ass-shots. So again, I had to pass. So frustrating, as it was only the second calf I’d seen on the hunt, the last one I would see, and neither situation allowed for even a second of a shot I could feel good about taking. Had either stopped for even a second or two, I’d have calf meat in my freezer this winter. But they didn’t. And I don’t. The first year since perhaps 2003 that we won’t have calf for the winter. 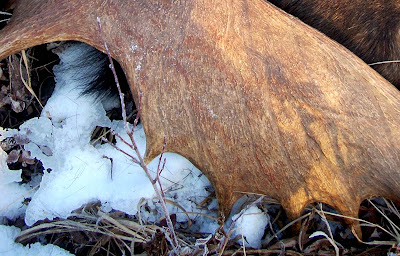 With my heart thumping, I made my way back out of the cutblock to meet with my dad, who was supposed to meet me nearby. I was adrenalined up. Then, I heard a very loud and long boom. Then a second shot. My dad had a bull tag, and after 12 days straight being up there looking for one, he’d finally found one on his way to meet up with me. He was figuring it could easily be the first time in 30+ years he didn’t have moose in his freezer. Had that bull not been there, we very likely would have pulled out within the hour, skunked. So we have moose [2.5 year old] for the year. Some of those posts I’d been hoping to write can now actually be written. I’ll be butchering this weekend.