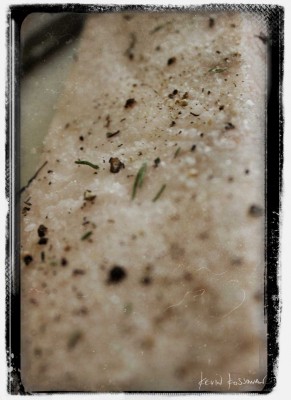 I’m used to butchering pigs on ‘Pig Day‘, and largely leaving charcuterie fun for some point in the winter when I feel like it. Not this year. My cellar’s empty. I feel like it now. I wanted to get started as soon as possible on a few different preparations. I also had to resist going too crazy today. For example, I had a nice slab of back fat [second photo] that I almost cured whole. Unwise. I don’t need 4 lbs of cured back fat ready all at once. So I split it in 3, started curing a choice piece [photo on left], and froze the other two for curing in a few months, hopefully before I run out of the first piece. I’ve learned with dry curing that pace is important. Have to be able to keep up to the stuff.

I may as well start there: dry cured back fat. Yes, this is essentially ‘lardo’, but because I fully intend on departing from convention to localize to where I live, use what I have in season, and suit the tastes of the palates I feed, as a general rule I’m going to try to avoid european names from here forward for risk of offending those that feel that a preparation named after a classic, traditional product  should respect it’s heritage. I agree. Mine might be washed in apple brandy and briefly smoked with apple wood if I feel like it. It might have wild herbs and wild onion from the north rather than mediterranean flavours. The differentiation might seem like high-concept wanking to some, but to me it matters. 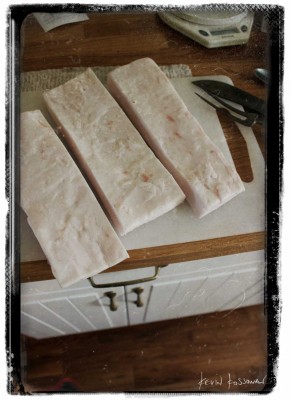 So dry cured back fat. First off, I don’t need oodles of this stuff. My waistline certainly would appreciate some mindful moderation. I’m going to cure a 3/4 to 1 lb strip of the stuff every 3-4 months to hopefully always have some on hand. Today’s strip was 321g, 7g dry cure, some light grinds of black pepper, 2 sticks of summer savory leaves, and a crushed up twig-tip of dried rosemary. All the recipes I could find called for cure #1 instead of #2, and if somebody can explain that one to me, please do. My intuition says use #2 because it will be dry cured. This will be the first dry cure I do with #1. I think next one will be with #2. Into a zip-top bag it went, with a brick atop it for weight, to cure in the fridge ‘until’. After today, I have many ‘until’ dates that I need to get on a calendar to manage. It will then come out of the fridge and be hung in the cellar.

Next up was dry-cured ham, as I wanted to do a whole muscle dry cure preparation. I’ve long wanted to dry cure some ham, one day a whole one. I gave a small piece a shot as a newbie, and it was a fail. Time to try again. A friend had taken a very successful run at fiocco, and I wanted to do something similar. The piece I isolated was from the same location as a fiocco – which is essentially the sirloin tip as best I could tell [corrections welcome]. It was a good size to take a run at for now. 775g, 27g salt, 2g instacure #2, 3-4 sprigs summer savory leaves. Into a bag, into the fridge. [photo below left] 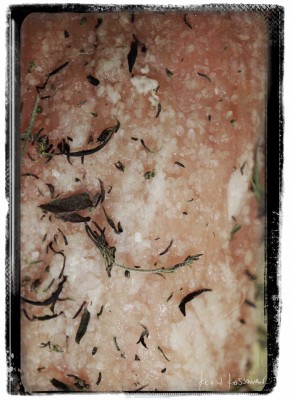 Next up was to decide when to take the ham cuts out of the brine pot in the garage. Conveniently, the weather has been cold, and the brine pot has been outside for days staying very cold, and not occupying space in my fridge. I’ve under-brined many a piece of ham, leaving that undesirable center with a little circle of gray, unpinksalted meat that makes for terrible presentation when sliced. But I also didn’t want to over salt it.  Estimating 1/2 day per lb, I decided to pull both pieces at the 27 hr mark. If it’s not enough, I’ll give them more time next year. One of the benefits of blogging: notes for when you forget what you did last year. I followed Ruhlman’s brine ratio and opted for no aromatics in it. They will be smoked over apple wood shortly.

The hocks are still in brine. I’m giving them 3 days in there. Looking forward to hot smoking them as well. Hocks are a funny beast. They are big and bulky relative to their meat output, so I’m going to try to keep them out of the freezer for that simple reason to leave room for beef, moose, and other things. Post smoke, I’ll pull all the meat, make some appropriate dishes for a week or so, and freeze any excess. I’m guessing that rather than a cubic foot of freezer space for them, it’ll be a medium sized ziploc baggie at best. 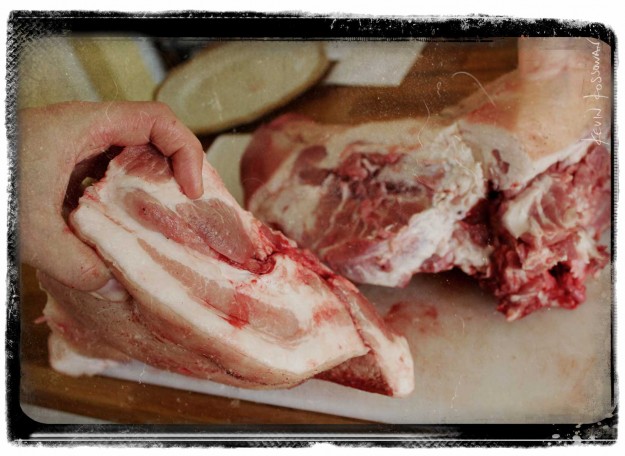 Dry-cured pig face. Although I think that roasting a head and pulling the meat is its best use for us and minimizes waste, I also wanted to dry cure some. I’m going to call this ‘pig-face’ as the cut I’m choosing is not strictly jowl. There’s some cheek in there. Some other bits and pieces. Other name ideas welcome, as ‘pig face’ isn’t terribly aesthetically pleasing, now is it? All the neck meat was put into trim, and the side of face that you see on the left was trimmed up, skinned, and cured. 900g pig face, 32g salt, 2.25g instacure #2, 2g black pepper, few leaves of dried sage, couple sprigs of fresh english thyme, and a tsp or so of welsh onion seeds. Ground up the cure in a mortar and pestle, and sprinkled it on. I’ve been very pleased with how uniformly the ground spice mix applies, the herbs get integrated with the salt really well and distribute evenly – just doesn’t look quite as lovely. Into the fridge it went.

The balance of the day was grinding meat, including some for a simply flavored fresh sausage that’s on deck, and lots and lots of clean-up from the day before. I’ll do individual posts on these items as they get completed, for those that are interested.