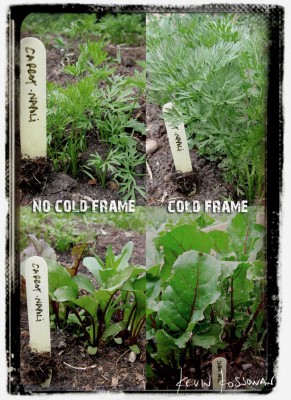 I’ve been meaning to take some shots to illustrate this for a while now: the disparity between cold frame sown root veg [April 1], and direct sown when the soil was ready [early May]. Last year, I had succession planted carrots over a few weeks, and at some point in the summer, they all ended up about the same size anyway. I wasn’t confident sowing root veg super-early would make much difference in the end or be worth the effort. At this point though, the gap seems rather large.

The marker is for scale. Clearly the cold frame carrots are miles ahead. It’s equally dramatic with the beets. Looks like the result will be us eating beets and carrots a good month or more earlier from the cold frame sown rows. No complaints here. I’ll take early.

It’s also likely worth noting that my first greens crops from the cold frame are all harvested, many weeks ago, and I’ve already got bush beans growing as a 2nd crop. A third crop will go in there post-beans: winter ready greens again like kales, lettuces, arugula, etc. If this plays out as expected, it will be my first harvest of 3 crops on the same space in our short growing season.