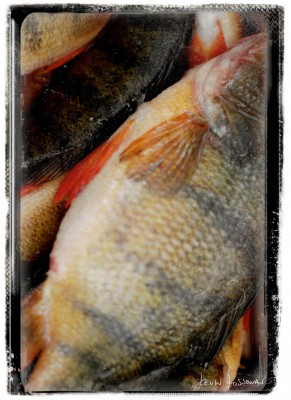 Some Grant MacEwan University students were at my house the other day doing a photo doc about me, and my dad showed up with a box of 9 perch he’d caught. One of them was a giant 14.5″ long [the fish, not the student], and weighed 830g. The roe sac in the thing was giant, filling my open hand. In fact, every single one of them was female, and I removed all the roe sacs, adding up to a whopping half-kilo+ of perch roe. That’s a lot of roe. What on earth was I going to do with that much roe.

The man who guided me last month for Episode 26, and as a consequence got me hooked on this ice fishing thing [I’ve gone every single week since then], suggested frying the roe until crispy. Sounded interesting – I’d only ever cooked roe until just done. Crispy things, generally speaking, are tasty. As it turns out, fish eggs take a long time to get crispy – but they do. They also pop all over, many an egg making an escape from the pan like popcorn might do without a lid. I recommend covering the pan with a screen. I added a bit of red  onion, salt, and it definitely benefited from some pepper. Happened to have some re-fried mashed potato to go with it, and those to things get along. Fried eggs and potatoes, outside the box. The cous-cous-like fish eggs kind of end up like a fried breadcrumb topping, which is very pleasant. I would do this again, but would love to try it when there are fresh chives, parsley, maybe some chervil in the garden to finish and toss them with. More roe R&D is on its way soon. 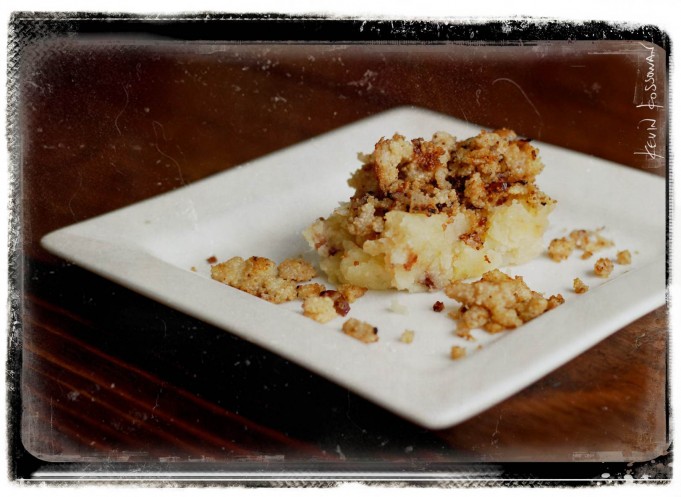