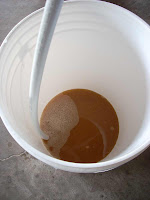 What a breeze. How satisfying. Some comments on my setup.

Overheating. The unit did not overheat and shut down. The metal casing certainly got hot, but the pace of crushing, then pressing, and all the other things involved – picking, meal breaks, moving carboys about, etc – seemed to give it enough time to cool down. I can see that doing 3-4 bushels or more in one big long crush may create a problem for others. So pacing it out is perhaps important. All I know is 3 of us were wowed by its prowess and speed. Dimmer unnecessary, the on/off switch was enough.

The hopper. Unnecessary as a hopper, as you can’t really fill the thing up or a couple apples will jam side by side in a few seconds. But it’s still necessary – as a splash guard. It avoids some mess, and likely avoids the odd apple getting away on you. Also perhaps a safety device keeping hands away from their certain doom.

Surface warning. In the current setup, it is very portable, but also likes to dance around a bit while operating. If we had done this on a kitchen countertop, for example, it would have been very rough on it. I highly suggest NOT using a surface you value under the machine. Two man job. This jumping around also made having an extra body handy, if not necessary, to hold it all down while the other person threw apples into the machine. The apples liked to get hung up in the rubber throat of the crusher, and simply tossing another apple at it knocked it down into its demise. A pruned apple stick helped the job as a poker when apples were uncooperative.

Overall, crushing was the easiest bit for us, and opportunities for mounting the machine into something to hold/stabilize it are there.

PRESSING
The fatal flaw. The major problem I referred to in my press design was airflow. The hole at the bottom of the pail wants to drain juice. But if you press down hard on the plunger, it prevents all air from entering the system and the drain simply stops flowing for lack of air to replace it. The juice backs up the sides of the plunger and start entering it. You can push all you want on soggy cheeses and it simply does not work. I got bloody sick of pulling out the plunger, breaking the suction seal with a knife, then pulling like hell with needle nosed pliers. Do not do this. It sucks.

The problem was that it took a while to figure this issue out, and worse, that it simply wasn’t that simple. Having abandoned the plunger and noted minor possible improvement, we finally landed on the real issue: the cheeses themselves. We were making them too large and wide, and they’d do the same thing: squish out to the perimeter of the bucket, and with some pressure, prevent all air from entering the system. It needs air to flow. That simple.

The solution. The plunger assembly needed to change. The cut bucket bottom previously a plunger was now simply our cheese mold. We found that you need to distribute weight – so the base of the plunger base contacting the cheeses needs to be as wide as possible while letting air in. We cut a 2×10 chunk to a crude shape to do the job. Same lumber and blocks as the ‘beam’ worked fine. But the second part was smaller cheeses. We made them maybe half sized, twisted the bags tight to expel as much juice as possible by hand, and tied the cheese into a mass about half or less the diameter of the bucket – so that when it squished out, it wouldn’t fill all sides and create an air seal.

Other findings:
False bottom. We built a ‘false bottom’ to the bucket to allow the juice a place to go, and to prevent the cheeses from contacting and plugging the drain hole. It was our first incorrect idea for solving our flow problem – we thought it was simply getting plugged. It was entirely made with the destruction of a bucket lid. Necessary? Not sure, but it’s easy to slap together and may help the process.

Tipping. We found that the hole placement required there be quite a few ounces of fluid in the bucket prior to it reaching the drain [even though I drilled it as low as I could]. Tipping the frame towards the hole and bucket seemed to work well, especially at the end of the cheese. It allowed the juice to escape, which would otherwise be absorbed back into the cheese. It was easy to give the jack a turn with a free hand, and have the last of the juices run free.

3 Cheese. A full stockpot of pomace made us 3 small cheeses, which could all be pressed at once – providing that once squished flat, they were not touching the sides of the bucket, of course. I found the cheeses, once twisted & squeezed, then tied [kitchen string], were best squished a little flat for stability, then placed in the center of the bucket. Stacked all in the center, they seemed to avoid the sides [airflow], and avoid the plunger from going sideways as you pressed simply because of a balanced load, so to speak. Once you’ve made a few cheeses, this gets really easy. The fabric for the cheeses was simply a find at a local fabric store – the best I could find that had fine holes and a bit of stretch. I bought 2 meters, and it made enough fabric for 3 cheeses [correction, I then found fabric for likely 2-3 more cheeses while cleaning down, so 1m would likely suffice].

Once we had our shit together, it took us 2 hours to pick, crush, and press 100 lbs of apples from my tree. But the day in its entirety was 8-4, so it took a lot of pissing around to work out the kinks. Happily, I can say that we succeeded. The carboys are downstairs awaiting.