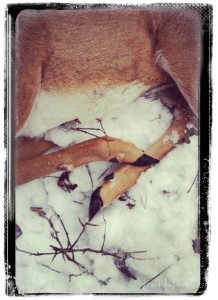 I’m pretty sure I was a teen the last time I shot a deer. Long ago enough I don’t remember how old I was, but I remember why. And it’s not because I don’t like deer.

My thoughts on deer as a game meat or red meat in general were changed a few years back when I had a chance to take antelope [deemed best], calf moose [close behind], and mule deer doe [deemed barrel bottom, at the time] side to side, prepared the same way, aside friends-now-food-heavies Allan Suddaby and Kristeva Dowling. Kristeva had brought the doe. To my pre-existing bias’s shock, the three were all lovely. Different yes, but shockingly not as much as I thought would be the case. Certainly not in a fashion that would justify someone disparaging one over the other by the margin I had been. That moment I decided to be more open minded, revisit my bias, and start afresh.

My prior bias was influenced by a lot of things, in my defence. Not the least of which was my first and only prior experience hunting deer being traumatic. My first big game hunt where I had rifle in hand. By that I mean high powered – pretty sure I’d never even shot one. I’d grown up shooting grouse with rifles as a kid, but certainly the kind that had enough power to kick the scope back into your face to cut you open above the nose and bleed down your face was new to me. So there’s that. That, and it wasn’t a great [or confident] shot, and I shot her badly, in the hind quarters. It was an unpleasant death for her, and a very unpleasant experience for me as an influential neophyte big game hunter. It did not end well. I decided that sucked. I’m good. Add to that some complexity around my parents’ concurrent divorce somewhat revolving around hunting, and this late teen got his mind in a corner. Wasn’t the deer, let’s just say.

Fast forward a couple decades. I’ve been spending the last one hunting moose and elk, having gotten over both my resistance to big game hunting AND my preconceptions about deer as a culinary happy-place. Decided to hunt big game during my food supply renaissance back almost 10 years ago. I fondly remember Hank Shaw weighing in on my experiences back in the day pre-his career in the wild food space. Good friend and Shovel & Fork business partner Chad Moss invites me out deer hunting. Truth is we seriously needed to have a business meeting. So I bought a deer tag.

I learned a few things on the hunt this week. One is that hunting with Chad is ridiculously enjoyable – so gratifying to get along with anybody so well. I learned that if you’re going to walk several miles in the bush in a foot of snow in big boots, you should probably be in shape. I learned what ‘hip flexors’ were. Was reminded not to give up when hunting – food only happened when we were just about to drive home, and decided to check ‘one last spot’, well past noon. Another is that I didn’t crumble under pressure. I had my scope on one animal, had one chance, and connected. With big game, as I’m sure others can attest to, I’m pretty sure that last moment before pulling the trigger is burned into your brain whether you want it to be or not. I vividly remember that moment from every kill I’ve made. This one presented a challenge I’d never seen – I could see her hind quarter and her head in my scope, the rest hidden by a big spruce tree. No kill-zone shot. Wasn’t going to shoot her in the guts and prime cuts. It ended well. Thank god for that – didn’t need another bad experience to put me off for another twenty.

A lovely lady on instagram challenged me [which is fine] about posting such a picture on social media. I get it. It’s not for everybody. I swear the moment I shot my first calf moose I fully understood why somebody might not want to participate in death that way – and let me tell you, most folks have no idea what they’re saying yes or no to. My take as a human is that things must die if I don’t want to do the same from starvation. I market garden veg for a living, at least in part. I kill a lot of plants. Some people think killing fish and chicken is somehow different and okay [I have laying hens that are my buds] – but I’m of the opinion that taking one life with lots of biomass is better than taking many, many lives to do the same [you chicken people, I’m looking at you]. A whitetail deer that has freely lived in the bush for its whole life, and dies with zero stress prior is about the best meat I could define. I’ll take it any day over anything that’s domestically raised for more reasons than make sense to itemize in this post. I’ll let you fester though with pondering what your meat eats, how much stress it goes to prior to death, the conditions in which its killed, how it’s handled, and how much the person handling it is concerned about your well being.