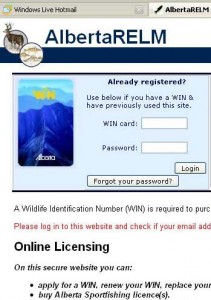 In the cold of January, it’s the arrival of seed catalogs putting your head into the coming years’ gardening season – knowing that in a couple months you’ll have seedlings starting their journey.

With hunting, at least in this province, today’s a similar kind of day. It’s mid July, our gardens are just staring to catch their stride, but it’s already the day that decides what our big game hunts will look like. All the animals I choose to hunt are on a draw basis in the zones we hunt in – meaning every year they figure how many people put their name in, how many tags they can reasonably release, and divvy tags out according to a priority system that gives a higher priority to those that didn’t get last year. I you forgot to get your draws in in June, no tags for you this year.

So this November, I’m going calf moose hunting again! For the 5th consecutive season since 2006. I’m really happy, as I REALLY missed having calf big game over the past year – last year the hunt yielding no calf.  For the first time since perhaps 2003 or 2004. [2007 was crazy successful with 2 calf moose and 2 calf elk]. I’ll also have an anterless elk tag [a December hunt] in that same area. That one I seem to get every other year. And although my priority score has been bumped up again this year, I’m only in year 2 of drawing for my antelope tags which for non-trophy and trophy take 5 and 7 years respectively before ‘you’re in’. That’s commitment.

It took me a while to get my head around the fact that from year to year, I had little control over what hunt I went on and when. I could be down south in September hunting antelope, up north in November for calf moose, or in December for calf elk. All of that got decided for me today. Time to start planning the hunts!

4 Comments on “Draw Results: Deciding For You”