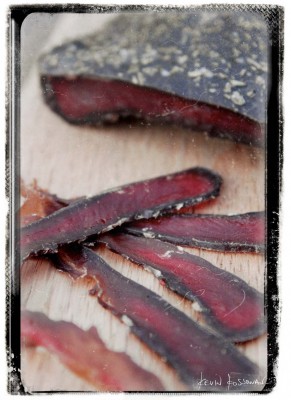 I got a lot of questions about how the dry-cured elk heart turned out – and I didn’t know until today. Sliced into it exactly one month after the start of the cure, and I’m on the fence if leaving it longer would do it harm or good. You can see in the photo that the exterior’s dry like a jerky, while the interior’s got some texture like a lightly cured fish. Describing fish texture and game meats in the same sentence likely doesn’t conjure pleasant thoughts, but it’s not unpleasant. That’s what’s shocking.

My expectations were strong, rich, heavy, mineral/irony, dense. It in fact is delicate and mild – almost to a fault. It smells lightly like game but not strongly so, with light smoke notes from the cold smoke [I’d go longer next time], and is simply mushroomy & salty. I noticed the mushroom, then looked to see if I’d added any, and sure enough it’s obvious in the photo below that I’d dusted it with crushed wild mushroom and hadn’t noted it. I need to work on my note-taking-discipline. The texture reminded me of a thin slice of lardo in texture [more on that later] – denser than the norm, but in a pleasant way. Overall this is so light, in fact, that when thinking about pairing a wine, I think it would be lost by any red, even the lightest. I wanted a brandy after giving it a go.

So the dry cured heart was surprisingly delicate. Next time around, I’d omit the mushroom [too dominant], and herb and cold smoke it quite a bit harder so that it had some aromatic balance to the game vibe on the nose. Other than that, pretty happy with this one. Yes, I’m a little surprised. 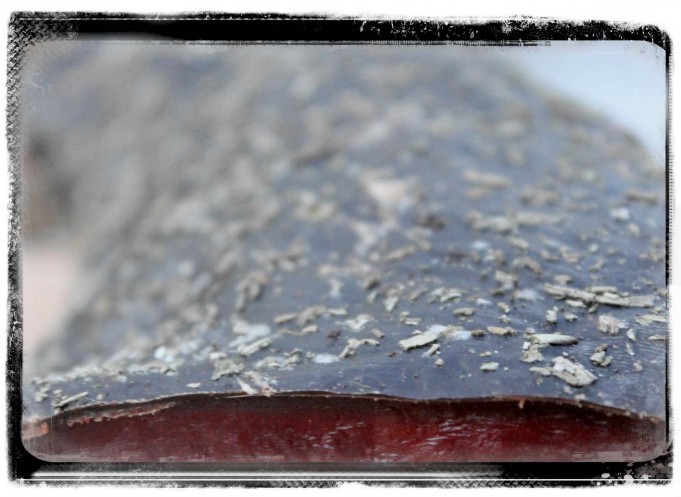