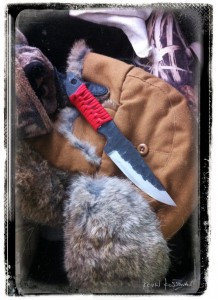 Elk are damn smart. Someone visiting Jasper National Park might not think so as they drive by an elk casually grazing within the throw of a paperweight, but in any other setting they demonstrate why they out-survived the sabre toothed cat and the wooly mammoth. I’m serious, look it up. They’re nocturnal feeders [park elk excluded], so you’re essentially trying to get between them and their feed just before dark, or coming back from it at first dawn. It’s how the hunt goes – one I’ve been doing since 2006. When my calf moose draw was declined for the first time since that same year and I was left holding an antlerless elk tag, I was highly motivated to buy deer tags. Such was my optimism for success.

As it turned out this year was going to be different. The guys had been out before me [I’m spoiled, I know] and had two fields with serious amounts of elk track to hunt. First night out there was a missed chance at a large herd. Next morning I saw a bull that I’d have had no chance at even if I had a tag. This was already success as my prior experience was hunting elk morning and evening for days without seeing a thing. Day 2’s evening, we spread out across the field where we’d had the chance the first evening. I heard animals in the bush right away, but without cows chirping or bulls bugling there was no way to know for sure whether it’s deer, a coyote [one did turn up], a moose, etc. An hour or more in, as legal shooting time approached and after a visit from a coyote, my heart freaked out as I saw a string of elk walking out of the bush into the field to feed about 150-200 yards away. A lot went through the brain in those few seconds that get printed indelibly before pulling the trigger – including a pile of adrenaline that doesn’t help the cause. It IS antlerless, right? Not interested in making THAT mistake. It IS a safe shooting direction considering the location of my hunting partners, yeah? It’s broadside. There are other animals coming, should I scope others? They’re calm now…do I have time, or if I hesitate will they turn and bolt? I then had this moment of realization that I’d been hunting days of years for this one singular moment to happen – my crosshairs on an elk I was tagged up for. Committed. Pulled the trigger. The elk went down in its tracks. I got really, REALLY cold as the adreneline jolt went away. One of the most memorable hunts of my life just ended as well as I could have hoped. 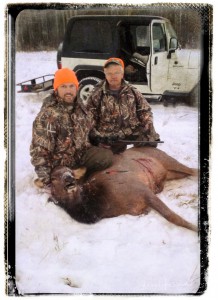 I suspect my gratitude for the successes I’ve had big game hunting this year is in part to last year’s doing without having been on the floor sick rather than on my hunt. I went a year without big game for the first time in a decade. Not a drama as there many other delicious things to eat, but it made me consider how much it’d become part of my culinary culture. My grandfather’s recent passing reminded me all season of the legacy of culture he left behind. My dad shared a story this time out about my grandfather first taking him deer hunting when my dad was 21. He’d shot a whitetail and didn’t even know what to do with it when it was down. My dad’s one of the most seasoned, accomplished, and cool-headed hunters I know. My newbie-ism is slowly dissolving, and I’m now bringing my kids out. Just in my immediate family game will have impacted the culture and flavours in our  Canadian kitchens for 100-200 years. When I was a kid that sounded like a really long time. It doesn’t anymore.