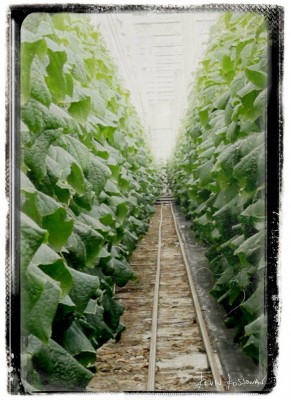 I’ve been wanting to shoot video in a local greenhouse for quite some time. I know, probably sounds odd coming from the guy who eats asparagus in May and June and abstains for the balance of the calendar year until they’re in season again. I may be an idealist most of the time, but I also have a realist streak and know that the bulk of consumers want to eat their favorite veg year-round. I spoke last year at a UofA event at Sunfresh Farms and learned that although we may not know it, a serious % of the cucumber and pepper product you find in your local box grocer is grown locally. Apparently Alberta’s not only good at beef – we’re rocking the cucumber market too. Who knew?

Doef’s Greenhouses is a success story in agriculture, from finding a niche to navigating scale and growth, through to having done some wise succession planning to incorporate the coming generations of farmers. They’ve succeeded both in the wholesale and direct-sales [ie, farmer’s markets] markets. Impressive stuff.

It blows my mind that I can shoot this video of fresh tomatoes and cucumbers, then drive two miles and go ice fishing to shoot Episode 34, which will consequently be hot on the heels of this one.