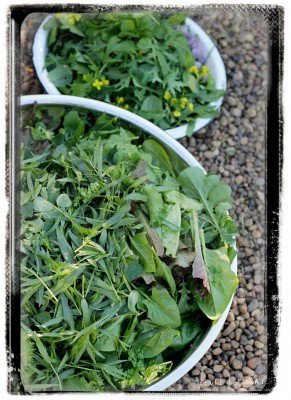 My buddy Travis has been doing cool food stuff for ages, and you might recognize him from prior episodes about the Edmonton Organic Growers’ Guild or ice fishing. In fact, we were sitting on the ice catching whitefish when he mentioned his spring plans to do an intensive backyard greens operation for sale to market, restaurants, and door-to-door by bike. I knew this episode was in my future. Such a cool idea. What I hadn’t planned was that he’d be selling out in a blink at a single market, and that the excess greens I was experiencing in my gardens would be of use to him. He was all over the idea of aggregating community backyard growers for sale at market, so he now sells ‘Vitamin K’, which is the seasonal blend-of-the-week from my yard. It sells out. His entire production sells out. We’re both ramping up production to try to keep up. The funny part: I’m still growing all the stuff I normally would for my family – apparently my small yard can grow enough for us AND have excess to get to the community via the market. Who knew.

For those that bought, here’s what’s in it this week: bionda di lyon chard, spinach, french tarragon, chervil, red russian kale, miner’s lettuce, mache, wild chive blossom, forono and bull’s blood beet green, arugula [leaf, white blossom, and buds], mizuna [leaf and yellow blossom], komatsuna, mustard [the hot one], dandelion, chick weed [yup, it’s edible and good for you], tatsoi, Italian oregano for some savoury action, a touch of dill, a mix of lettuces, and a variety of other this and thats. This week saw the last of the spinach until the fall crop, and many of the blossoms there this week, won’t be there next. Not because I’m trying to switch things up. Nature’s doing the switching up.

Travis has been doing some online video about his micro farm, which you can check out here.