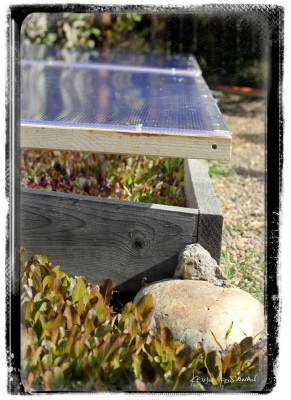 I built my first cold frame back in March of 2011. It has undoubtedly changed the way I grow food. I’m now up to 8 frames under lids, with another 6 soon to be built for the 2013 season – the majority for market. This vid is simply a look at how we’re building them now, after much homework in old-school books about how the Dutch and French used to rock this technology, and much debate between Travis and I about the best way to tackle it.

A simple description of the current design: 2×10 back and sides, 2×6 front for the frame on the ground. The lid is a 2×4 back board hinged to the ground frame. 2x2s are then added to the sides and front of the lid, and a space-age corrugated greenhouse plexi is affixed to the top. That’s it. It uses geothermal and solar heat to assist on temperature, and the biggy is the lid itself protects against hail, pounding rain, heavy winds, and frost. And leaf debris, and house sparrows, and neighbourhood cats, and romping children. And snow. I’ve grown greens as early as April and as late as November before without much effort. Now that we’re supplying restaurants, food trucks, caterers, the local culinary school, and the public, it’s time for some effort to extend the season in an energy-passive way and with some volume. I’m not interested in heaters – not just because they’re energy pigs, but because they falsify seasonality, and alter the culture around it. I am however interested in advocating for a re-think about what’s in season, helping sharpen the #yeg pencil around terroir, if you will. There you have it.