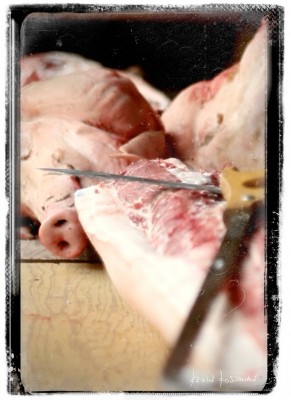 Pig Day. This was my 5th annual pig day – the one day a year we spend putting up all the pork we’ll eat for the entire year. If we run out, one waits until the next pig arrives. This site is long enough in the tooth to have documented the 1st annual Pig Day. I’m sure it will document many more.

This one was particularly memorable. Twitter made me aware of rock-star-in-hiding Elyse Chatterton, a Master Butcher from the UK with some serious meat cutting skills. A half bottle of wine made me brave enough to invite her. After that, a number of invitations went out to friends, and we all of a sudden had a crew of 12 and 10 sides of Tamworth for 2012’s Pig Day – including the farmers that raised the pigs. A full day of sharing, cutting beautiful pork, hard work, eating, drinking, with the air wafting with wood smoke and conversation. Not sure there’s more one can ask for.

The video features Elyse talking through how she’s accustomed to breaking down a pork, UK-style, and Shannon Ruzicka speaking to how the pigs are raised. And yes there was some roast tying race action. And yes, she won with ease.