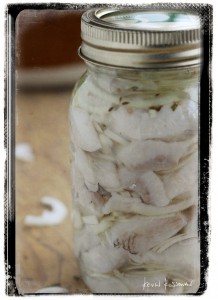 This series [Field to Fire] is going to strictly be about exploring regional ingredients, and preparing them a couple ways outdoors. Same format. Every time. I liked the idea, but a major problem with it is that it excluded other fun content that I’d normally shoot and get involved with. So rather than kevinTV being one ‘thing’, it now is multiple ‘things’. Multiple ‘shows’. This will be one of them. More about this switch-up here.

Instagram feed watchers have been witness to my posts about ice fishing. Action went from absolutely dead in Dec/Jan to limiting out in an hour in late Feb, so I had some whitefish to work with for this episode. They’re a strange species – one that I had no experience with until lately. I hardly feel bad about it though, as while showing off some instagram photos recently to chefs, I got some questions about what species they were. They just aren’t solidly part of our food culture beyond certain niche pockets. Hence my interest in featuring them. Many more ‘Field to Fire’ episodes on deck. Enjoy.

9 Comments on “Field to Fire – Whitefish”