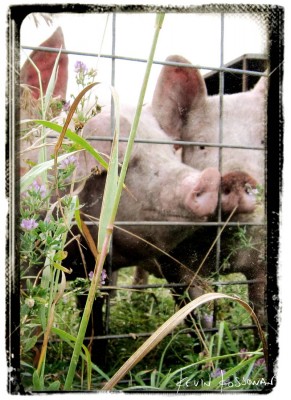 Shannon & Danny Ruzicka at Nature’s Green Acres are pretty tough not to like, their kids are cute, their farm is neat, their dog is gentle, their land is gorgeous. But tossing all that bias aside, how they raise their beef, chicken, and pork is truly remarkable. Clearly heavily influenced by Joel Salatin [If you haven’t watched Food Inc, you should] and well read and mentored in contemporary sustainable agricultural practices, these two are operating at an incredibly high standard right out of the gates.

For example. I’d arrived early in the morning, and hopped in the truck to tag along while Danny did his morning chores tending to the pigs. First off, their pen looked pretty nice. Their water’s overhead and always clean, the ground was not nuked to bare dirt as pigs tend to do, and the animals looked rather…clean. Didn’t even stink. He proceeded to hook up the truck to the pen and move it onto fresh knee-deep-grass. The shocker: he’d done it the evening before. Every morning. Every evening. Every day. The pigs are on deep, thick, fresh pasture essentially every few hours. I probably looked a little stunned.

The good news is they do the same for their chickens. I had arrived with a question from my wife wanting to know why their chicken was so exceptionally good. It could be their ration of 90% wheat/10% peas [they avoid soy, the standard protein-rich item in feed, to avoid GMOs], could be the grass – I left without a conclusive answer. As for their Nouveau Beef – a brand they’re creating for milk-and-grass-fed 6-7 month-old beef calves slaughtered in the fall – they’re tougher to spot when you visit. They have just under 20 cow-calf pairs on 200 acres of beautiful land. The way I figure it, that’s more than 5 acres per animal. And it sounds like the next step is implementing a rotational grazing program to further improve the health of the soil, grasses, animals, and ultimately us. How nice of them.

The bottom line is I’m a huge fan of what they’re doing already, and where they’re headed. They’re happy to sell sides and whole animals [important to me], are completely transparent, and as best they know how are growing the healthiest food they can in the healthiest way for the land. What more could you ask from the farmer who raises your meats?