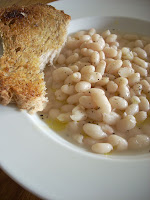 My great grandparents on my mom’s dad’s side were from Vendée [France], where ‘Mogettes de Vendées’ – a well respected French white bean – are grown. [The ‘well respected’ Tarbais bean was recently spotted at $45/kg locally]. My grandfather grew up eating beans, and fed them to his kids, and his grandkids. He makes them, to this day, at the ripe age of 84 or so – but I believe he uses Great Northerns, the closest readily available substitute.

MAN, did we hate beans as kids. The older generations were split into love/hate camps. And it was ‘a thing’. If you brought friends to the lake where my grandparents lived, they were expected, as everyone else, to eat beans. As a celebratory arrival dish. Before a meal. A right of passage, nearly. A good friend of mine politely declined years ago, and my grandfather jokingly offered him the choice of eating them, or having a bean enema in the middle of the night [my grandpa had a medical background].

Years later, I have developed a fondness for them. Nostalgia being part of it, I’m sure. But I also had some really good contorni in a restaurant in Buonconvento in Tuscany that illustrated how simple and lovely white beans could really be. Since then, I’ve made them often, screwing up the odd batch – I believe because of the hardness of the water.

So here it is. Here’s my current adaptation of the ‘grandpa bean’ recipe, in its simplest form.

Put the beans in a big bowl. Cover with a couple inches of water, and let sit overnight.
The next day, drain, and put the beans in a pot. Cover with water, maybe 1/4″ or 1/2″ over the beans. Add bay leaf. Squash clove of garlic, toss it in. Do not season. Bring to a boil and cook until the beans are tender. For me, this depends on the whims of nature, and can take 45 minutes or 5 hours, depending on which way the wind blows. Keep an eye on the water level to make sure the beans are JUST covered. When tender, season to taste with salt and pepper.

This is good eaten day-of, but completely unnecessary. We’d eat one bean batch for days. Some bean-eaters added chili sauce. Sometimes the bean batch had odd things like herb blends or cinnamon or bacon. I like them plain. They re-heat a charm, and perhaps one of the big reasons I’ve been making them a lot is, my toddler loves them. Just waiting to see how old she gets before she too, hates beans.