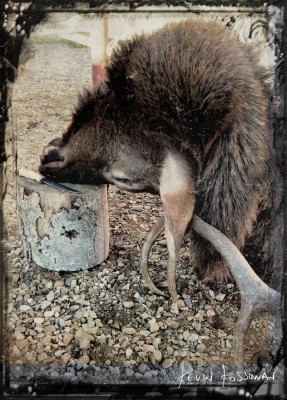 I recently was invited to attend a culinary competition at NAIT. On the menu were local lake fishes, elk, bison, and pulses [legumes] from our province. Pretty cool to see pickerel starters done 12 ways by 12 teams – reminds me of home.

The table I sat at, which happened to be served the menu from the winning team, was attended by the family of one of the competitors – myself being the odd man out. Which led to discussions of why I was there. Which led to the question from a female diner “how do you remove the tongue out of a game animal? I’ve tried, and couldn’t get it“.  I’m fairly certain I’ll go my whole life without being asked that again while eating at a fine dining establishment.

What’s funny, is that I actually had taken photos of the process while on this year’s calf moose hunt. I took the tongues of both the calf moose and the bull elk – which is seen in the photo. I’ve harvested them ever since first trying them on this night.

A few words of advice for those wishing to give it a go. First, although doable, removing it while the animal is hanging is a chore. Things are moving around too much. Get the head set up securely. With this bull elk, the antlers and a stump provided the best setup I’ve ever worked on for the operation.  Next tip. Do it while the animal’s still warm. Every part of the process is easier if you do. 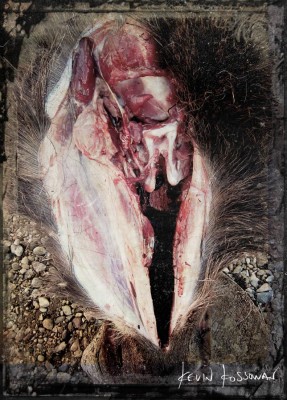 First, expose the bottom of the jaw as seen in this photo.  See that ‘V’ formed by the jaw bones? You need to run your knife along either side to free it up. I’ve found the tricky bit is freeing up the the bottom tip of the V. It doesn’t seem to want to let go there. I keep cutting out that V until I can grab the tip of the tongue from the inside, and pull it out. Once you get there, the rest is easy – simply cut away whatever else is holding it in, and take it off as far up as you can. What to do with it? .

I’m surprised at the bad rap tongue seems to have. It’s not weird. It tastes of the animal meat it’s from rather than like an organ or something funky. My dad made fun of me as I took the cheeks out of this bull elk – clearly not normal for the guys, and as the razzing and teasing carried on about lips and assholes [I did mention that I’d take the testicles if it wouldn’t cause an evidence of sex concern while transporting the animal], I shot back with a comment how he who mocks off-cuts and wine drinking probably eats more of both in his hot dogs and brandy than I. We laughed.

4 Comments on “How to Harvest a Tongue”