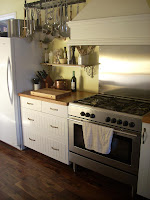 The light was nice in my kitchen a few hours ago so I took some shots. Shots of IKEA-ville. I’m a huge fan of IKEA, but would be a fan of any other store that sold decent quality, practical, and dare I say ‘nice looking’ kitchen gear too. Maybe that store’s out there – I could have missed it But it seemed that every other kitchen place I went into had things like a Viking beer cooler for $4,900. Or a range similar to the one I have but with RED knobs, for only an additional $10,000.

Can I just not afford it, and am just jealous of the name brand and the coveted red knobs on the range? Perhaps. Red is supposed to stimulate the appetite, afterall. Black knobs do nothing for the appetitie, I can assure you. Am I jealous that MY fridge isn’t playing hide-and-go-seek amongst my cabinets, or doesn’t have a TV in it? Probably. I’m at least pretty sure that spending a few grand more would mean my food was kept cold better. Oh wait, it wouldn’t.

Should I have spent a sum large enough to build an African village to try hard to play pretend that my kitchen was in Italy? I do like pizza, afterall. Nope. Nope, that’s not it. Stone counters. That money should be spent on stone counter tops. EVERYONE knows that stone counters totally make your food taste better, and make you a better cook. For that price, they totally must.

In conclusion, because we live in a democracy I am going to start an anti-IKEA facebook friend group to devalue their stock, and then open up an awseomer store in competition with IKEA so that next time I renovate my kitchen, I have real choice. Then: hostile takeover. Look out IKEA, I’m on to your games.