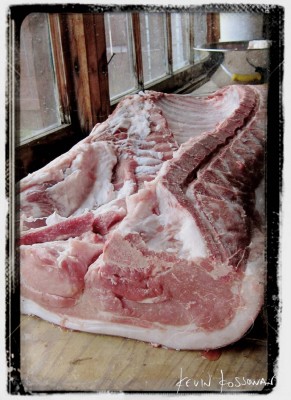 I just got an interesting phone call. It was a very nice guy from Alberta Agriculture and Rural Development Regulatory Services Division investigating my home butchering practices. Apparently my home butchering has gained enough public attention to draw some question as to the legalities of what I’ve been doing? Interesting. I thought I’d share the content and outcome of the conversation as it is relevant to my advocacy for home butchering.

The big question it seems was whether or not I’m buying meat, and then reselling it butchered, which most folks reading my blog would know is not the case. There clearly are regulations for meat processing facilities when the product is for resale, and I don’t think anybody [or at least I didn’t think anybody] is under the impression that I’m running a butcher/meat shop in my garage and am charging for my services. The good news for home butchering is that so long as it’s for your consumption, you’re allowed to go ahead and do it. Apparently I’m on side. No problems there.

But that led me to a question: my friends and I buy 3 pigs from a local farm, and I write the cheque to the farmer when I pick them up – when my friends pay me for their share/pig, is that then deemed to be me selling processed meat? We’re cutting it together, and folks leave with their share. I was assured that there was no problem with this practice, some common sense would apply, and that it would still be clear that I am not in the business of selling value-added meats. There is no problem with me getting together with friends to butcher.  Good. I would hope not, but was interested if having the friends actually pay the farmer themselves for their animal would be a better practice.  I was assured there was no problem with my existing approach.

I was then asked whether or not I was getting animals via going to the farm, harvesting them there, and bringing them home. As I usually mention in the posts about the butchering, we pick our animals up from a local meat processor, who do the kill/chill, have it inspected, and we take the carcasses from there. Totally legit practice. Carcasses need to be inspected – totally get that. I’m all for that. No butchering of uninspected domestic meats, check.

So the conclusion was that what I’ve been doing was fine according to the law of the land. I have the contact name and number of the nice guy doing his job that called to investigate my practices. If you live in Alberta and have any question about your home butchering practices, I’ll be happy to pass his name on to you so that we can be doing the best we can to be on side with any regulations around it. I know I’m glad I have his number in case I have questions myself.

I have to admit, I’m left wondering who led the provincial regulatory body to believe that I might need to be investigated. I asked twice, but didn’t really get an answer. Interesting.

12 Comments on “Investigated by AARD re: Butchering At Home”