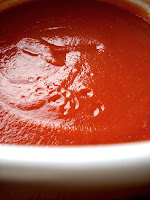 Having made lard, I’ve been mucking about [very successfully, I may add] with pastry dough. Which lead to tourtiere. Which lead to copious amounts of ketchup being used, which is how I roll with tourtiere. Heinz. I used it up, yep I did. Onto the grocery list it went.

Then I considered a ketchup a friend of mine had given me, that I also had just run out of. She’d made it. It was pretty tasty. I had a 40lb crop of tomatoes this fall, and had some put up. It was time I gave this a go.

No recipe here. It was some pureed tomatoes from the garden. A small tin of organic tomato paste. Some sautéed onion, garlic, and a tad of celery as a base. Tweaked the acid with white vinegar, the sweetness with sugar. Salt, of course. That’s it. Reduced it, immersion blended it, put it through a sieve for texture – and well, it looked like ketchup. Nailed that. Taste? Pretty dang solid. I tend to get jazzed about balancing acid and sugar in general – so ketchup may just present enough of a challenge to keep making it. With very little effort, I ended up with about a quart. That should last, oh, until next week if I keep making tourtiere. Ketchup has been scratched off the grocery list.