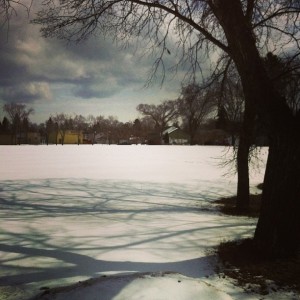 I’m getting quite a few questions about the prospective new Lactuca Urban Farm site, so figured I’d share where things are at. The quick answer: it’s in Inglewood and we’re in the process of negotiating the lease. Although nothing’s a done deal, we’re very near the end of the process. Perhaps I need to back up a bit.

Travis and I started looking at prospective farm sites some time ago. Despite being totally sold on the feasibility of backyard operations, we decided to scale via tapping into unused urban space for a variety of reasons – mostly financial and logistical, partly because we could, but also because both of us are keen to explore the potential of ‘what could be’ in urban ag. This site was our best hope: large enough for a considerable scale-up, easy striking [read: biking] distance for he and I [~1km or so as the crow flies from his house and mine], reasonably tucked away. It’s a site slated for residential development down the road, currently sitting unused. We approached the developer and they were on board if we could clear it by the City and the Community League. We’ve done both those things over the past couple months, with resounding support from the community. So now it’s time to sign on the dotted line.

The site’s over an acre. So we’re adding to the roughly 1000 square feet in the backyard intensive setups by about 45,000 sq ft. It’s more than we need, in fact, and we’re only going to use a portion of the space in the 2013 in order to manage our growth. All this space allows a serious expansion on the salad greens front, but also gives us the space to go to market with heirloom tomatoes, heirloom carrots, heirloom leeks, beets, radishes, cooking greens, and plenty more. The farm plan is drawn up. Seed is in-hand. Logistics are being finagled. Fingers are crossed.