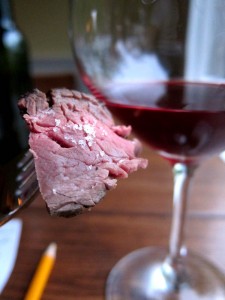 I just had an unexpected notable ‘moment’. I have long contemplated the concept of ‘what grows together goes together‘ when it comes to the game meats we hunt. It’s a reasonably undisputed culinary rule.  So thinking of moose and elk, it has begged the question of pairing it with saskatoons, high bush cranberry, labrador tea, and other similar items you’d find in the bush where the animals live. I’ve given the concept the odd shot, with varied and moderate success. But tonight.

I figured I should get around to bottling my 2009 Saskatoon/Juneberry/Amelanche ‘Batch 2’. It’s been in carboy in the wine cellar since October, and periodic tastings indicated that the theoretic winemaking improvements were paying dividends [details in the linked post]. So into bottle it went, and a half-a-half-bottle remaining was to be tasted:

Palate: voluptuous and finely textured – nearly creamy, with a light metallic-style tannin finish. The texture was a shocker, I’d put it into the 92-94 range. The flavor profile is well defined and the oak is well balanced. Saskatoon wine may not be for everybody, but if they do like it, I’d wager a bet they’d like this.

The moment: My fridge happened to contain a previous day’s fire-grilled comparison between tough-2009-bull moose tenderloin vs. calf moose blade steak. Sliced cold with some fleur de sel, with a solidly made saskatoon wine was poetry. Finally.

Because I know it’ll be asked: the bull tenderloin did edge out the calf blade in tenderness, but not by much. which imo, says a lot.