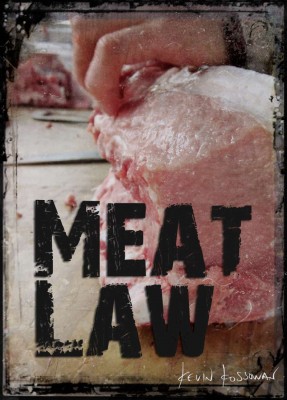 I am not a lawyer. Did I mention I’m not a lawyer? Sadly, I feel apprehensive to discuss law as it implies somebody will misinterpret this, act upon it [ie, do something stupid], and point to me as the source of their lack of awesomeness. Yeah, don’t do that please. I’m addressing this topic to try to share some of what I’ve learned in the past week about butchering at home, and to have an open discussion about it.

I first will refer you to the Acts, as I was: the Meat Inspection Act and Meat Inspection Regulation are the relevant pieces of legislation. These would presumably be the last word on the subject,  but as if often the case with law even after a few reads it was far from clear where the boundaries were for home butchering. I sought interpretations from the investigator at Alberta Ag that is probably sick of hearing from me by now.

The conclusion I reached based on what I was told, was that one can butcher inspected pork, beef, etc at home without permit or license, but that said meat cannot be given or sold, and is only to be used for one’s immediately family. I can’t find the legal verbage in the Act to support some of this [especially the ‘give’ part], but as aforementioned, I’m not a lawyer, and am relying on guidance from the Regulatory Services Division of Alberta Agriculture and Rural Development. One needs a Public Health Permit for the premises if one is processing for resale – makes sense. One cannot obtain uninspected meat direct from a local farm. [If I’m later told I’m misinformed about anything in this paragraph, I’ll edit this immediately]

There is one clear exemption pertaining to uninspected meat – section 6.2(b) of the Meat Inspection Regulation clearly excludes wildlife as defined under the Wildlife Act. So I read the Wildlife Act. Section 62(1) says ‘a person shall not traffic in wildlife’, and although they go on to define ‘traffic’, it did not mention ‘give’. So I called a Fish and Wildlife officer to get an interpretation of ‘traffic’. First, he was clear that I could give away game meat. Note the difference – can’t give away inspected domestic meat, but can with game meat. I find that odd. Secondly, he was clear that any exchange for cash or other form of consideration could be deemed trafficking. I grew up knowing the sale of wild game meats was illegal – so this was not news to me. Reaching a conclusion on the wild game side was relatively easy – far easier than wading through the domestic meat side.

So at the end of the day, having burned a week of my time reading meat legislation and talking to those charged with enforcing those laws, I’m pleased with where my practices stand relative to the law. Which…I was before hand. Glad everyone’s happy. If you’re left unsure, contact Alberta Ag re: domestic animals and Fish and Wildlife re: wild game – they’ll be able to answer your questions better than I.