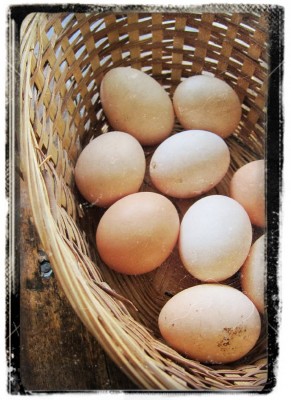 My diet is probably the most localized of anybody I know. Some come close, but let’s use me as the example. If I’m Mr. 95+% local food diet guy, and local, good quality foods are by your definition the most expensive foods, I should then have the highest food cost of anybody I know. But the facts are, the opposite is true. Our family’s food budget works out to about $400/month. That’s for a family of 5 [kids 5, 3, 1], which per person works out to $80/person, $2.66/day, or less than $1/meal per person. Thems is the facts.

How? I’m headed there, bear with me a bit. It’s critical to point out here that we’re eating the top quality ingredients we can find here too. Rather than buying my meat at Walmart, I’m buying the best quality pasture raised stuff I can find. Rather than eating veg bred for withstanding transportation, I’m growing those with the best flavor I can find. We even fit in buying organic grain in there – I think if more folks learned the difference between conventional grain farming and organic grain farming, they’d make that leap too.

Which leads me to an important point: the marginal cost of upgrading. Having visited an organic grain farm and concluded that I didn’t want to feed my family conventionally raised grain, I found a local supplier [Sunnyboy and Highwood Crossing for unbleached white flour] that was selling organic flour for $32/20kg bag. I could buy conventional at a box store for $13 or so. So I was multiplying my food cost 200-300% on grain. This seemed illogical to my inner cheap-ass, but then I looked at the bottom line. If we go through 3 bags a year, I was spending $39 before. Going organic would cost $96. A year. So $63 more per year. That’s $5 of my $400 monthly food budget I’m happy to spend to upgrade. Think about some of the things you spend $5/month on. Parking meters maybe? Those same ‘upgrading’ economics apply to many other items, including meats. And for the record, our budget affords us buying heritage organic whole-grain flours from Gold Forest Grains too.

A quick look at inflation and seed cost. My grandma’s 95. She was born in 1917, before the end of WWI. I’m sure a bunch of carrots at the market, if they were there at all, were a few cents. Seed cost would have been fewer cents. Almost a century later that bunch of carrots at a farmers’ market, $5, say. When I’m a senior, it will likely be $10-20. And I’m not begrudging the farmers those prices – they have to pay for their time to feed you. But the seed cost remains pennies. In fact, if you save seed [and Monsanto doesn’t sue you for intellectual property theft, that is], seed can still be free. As time passes, I’m convinced the economic value of seeds will become more and more obvious to the average consumer. The spread of end-product cost and seed cost is growing. I’m doing more and more seed saving. Did I mention the free part?

So I’ll cut to the chase on a few items. Let’s start with fruit and veg. Because we pick fruit until we can pick fruit no more with Operation Fruit Rescue Edmonton in the fall – saving fruit on the tree or bush that would otherwise get hauled to landfill – our fruit cost has fallen to essentially zero. And no we don’t need to eat apples all winter. Our freezer’s full of sour cherries, black currants, raspberries, apples, apple juice, and more. You could argue that I have to include my cost of gas to harvest fruit, but I’d argue that I don’t, because you wouldn’t include your cost of gas to go to the box store to buy the stuff.

Our annual seed budget for veg is about $100, and I could easily tighten that up if I felt it was necessary. So yes, that $100 bill pays for enough vegetables to feed our family for the year, year round thanks to cold frames and my root cellar [also economical to build]. So substantially all of our fruit and veg for the year costs a whopping $100 or so.  ‘But I live in a condo downtown and don’t have a garden‘, say you. Your solution is the Edmonton Organic Growers’ Guild – you can take the LRT to the UoA farm, spend some afternoons and evenings pitching in, and they get grants to pay for seed and tools, so your organic veg is free. There’s that word again: free. And would you believe they’re actually looking for people to take them up on this deal?!?

I’ve done beef-onomics and pork-onomics for years. When I first started buying whole animals, I was highly motivated to figure out if that big expense up front worked out in the end. Turns out for pork that no matter how I spin it, it works out to about $2.25 a lb, give or take a dime or so. Keep in mind, this is pastured, low-density, antibiotic+hormone free, happy pig, and I can shake the hand of the farmer I buy from. Box store pig isn’t any of those things. Yet my $/lb works out to less than the box store. Yes, less. I’ve done the math. So top quality meat for less than box store prices. The catch: you have to actually buy and use a whole animal [ie, not just eat its tenderloin or boneless skinless breast], and spend some time processing it yourself. And therein lies the rub. Time.

Most folks, when I start talking about food economics, will grab ‘time’, and toss it in my face. ‘You must spend every waking hour growing, processing, and preparing your own foods‘, say they. Anybody that knows me knows that’s not true. For example. It takes me 2 hrs to take a side of pig and break it down. That’s wrapped, packed, in a freezer, cleaned down. Folks will spend 2 hrs watching a movie and think nothing of it, so I’ll take that to mean 2 hrs is not a big time commitment. Harvesting apples [did I mention free?] in the fall can be done at a rate of about 100 lbs/hr, say. If you buy apples at the market for $2-3/lb say, than the economic value of your time is $200-300. Per hour. Not a lot of time, but even if it was it’s an economically efficient use of it, even if you get paid a whole lot at your day-job.

But even if it did take a lot of time, I’ll argue til the end of the earth that perhaps we should start to be okay with spending more time handling our own food. Call me crazy. I don’t think that’s a bad thing. I’ll still get those telling me they have NO spare time, AT ALL. Not one single day on a weekend a year. I think that’s dysfunctional and more is required than a reinvention of your food life. So long as folks own TVs, there are some spare moments in the week. If you’re that person that’s so strapped they need to figure how to best utilize those few precious spare hours per calendar year to maximize their food budget – email me or let me know in the comments. I’ll be happy to help you. But before you fear the time commitment, ask those that do it – grow, process, harvest, cook, and otherwise spend time with their food, and they’re likely to tell you it’s a wholesome, productive, happy-making ‘work’. A therapy of sorts. It’s good for the brain. It’s good for the health. It’s good for the pocket-book.

Willing to share your food budget? Any food items you haven’t found an economical solution for?