I love domestic goose and duck – so fatty, rich, and delicious. Sadly, their wild counterparts are none of the above. So what do they taste like? How should they be prepared? Questions that I’ve had for a while, and despite efforts online and at the library, only experience is starting to provide some answers.

In the past few years, I’ve butchered an awful lot of geese. I’ve de-breasted them, I’ve plucked them for roasting whole, I’ve taken the legs, and even have gone so far as going through the trouble of reserving the livers and hearts. I’ve poached, fried, fricasseed, roasted, rotisseried over charcoal, cured, and even made various sausages from the meats.

So what do they taste like?
In the field, you hear hunters talk about how good ‘specs’ [white fronted geese] are. ‘So much better than Canadas’, they say. You may hear the same about Ross’ goose. But more often than not, hunters are not foodies [not a diss, just a fact], and I’m the only one I know who’s geeky enough to have actually done a blind tasting. 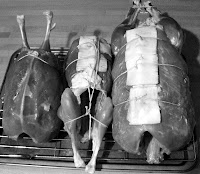 Left to right in the photo: white fronted, ross, and canada. That’s pork fat on the two of them. And the result? Despite what we thought would taste better and why, four of us found that they were indecernible, one from the other. That’s right. In a blind tasting, the taste and texture was essentially identical. So that was a myth-buster.

And not only did they taste identical, they all tasted far more like a poorly done roast beef than like the succulant domestic poultry birds we love. My good friend Yen recently offered the following notes “Flying liver. Holy man, this stuff is gamey. And it definitely hits the beefy end of the spectrum for texture. Nothing like any “bird” meat i’ve ever seen”. So it tastes like beef + liver + subtle hints of poultry. Wild duck is even more liver-esque. Not what I expected, and overall, not a pleasant a flavor profile, to be honest.

The texture
As…weak…as the flavor is, the texture is worse. It’s the toughest meat I’ve ever worked with. Can’t blame the birds, they’re migrating. And it gets worse – unlike tough beef cuts which break down with slow and moist cooking methods, this does not. I’ve had mixed success gently poaching the breast meat – more often than not resulting in tough-as-nails-ness. I’ve cut it thin and pounded it. I’ve confit’d it in domestic duck fat. The only way I can see getting past the texture is to grind the meat. And I’ve had mixed results here too. I find home-made goose sausage has a very unusual texture. Luckily, my uncle has sourced some butcher shops that do a solid job of making pepperoni with a pleasant texture. Makes me wonder how much pork they’re adding.

Second. Focus on texture. If you don’t, you’ll have a dish with unpleasantly tough chunks of rubber in it. Ideally, get a good sausage maker to make something you like and can share. If you’re adament to use the breasts as-is, here’s one idea from Yen:

And last but most importantly – check back here as I intend on posting more tasting notes and experiences, and am hoping others may one day post theirs in the comments!