Today I completed my first attempt at making my own sausage. It’s a lot of work, but damn tasty. I made a pork garlic sausage with herbs my garden and red wine I made with airborne yeast and no chemicals. It was an important first step in my quest to make a variety of ‘gourmet’ sausages during this year’s coming hunting season.

One of the main drivers for me to take this on – other than flavour and overall quality – is knowing exactly what’s in it. I chose the cut of pork shoulder. I ground it myself. Short of having raised the pig, I know where everything came from, that it was fresh and of the highest quality available – and no preservatives, additives, or other ‘unpronoucables’ you find on ingredient labels. And if I continue to write my blog entries in the coming week – no botulism either!

Time for a recipe. I have a large collection. Actually, I’m working on something akin to a cook book except it’s never going to be a book so I don’t know what to call it. More on that another time. For now – the glories of pork shoulder steak. Fat haters – ignore this one entirely. But for those not cowering in fear at the thought of eating some reasonably healthy pork fat, read on.

First thing you need to do is go to your local supermarket and buy a pack of pork shoulder steaks. They aren’t hard to find, and you get a big pack for roughly $10. They’re a cheap cut, because people fear them. Pork chops, people know. But pork shoulder? Oooooh. Or they just fear the fat, which is a shame for them. When it comes to pork, I’ll take shoulder over loin any day.

The only tough bit, and it’s not tough: Make the glaze. Use your mortar and pestle if you have, and if you don’t, improvise as best you can. Grind a small pinch of whole cumin and a half a dried chili per steak [if you like heat], maybe a bit of salt to act as an abrasive. Once it looks fine enough that you’re not going to be chewing on any whole bits of spice, add 1 clove garlic, and a half dozen or so small twigs of thyme, leaves picked. Add about a tbsp of honey to loosen the mixture. That’s it. If you do not normally use whole cumin or dried chilis – you should. You can likely buy whole cumin in a bulk aisle for a few cents, and a bag of dried chilis for a buck or two should last half a year. Both are excellent on grilled meats. And if you don’t have your own little herb pots to steal thyme from, you should. But store bought is fine, just more expensive.

Get the bbq nice and hot, and grill the steak(s) with a decent amount of kosher salt and fresh black pepper. Check it periodically, and when it looks nice, flip it and do the same thing. The focus isn’t doneness at this point. One thing the high heat is doing is getting the fat going and caremelizing. Yum. Once both sides look semi-cooked/seared, turn the heat right down, and liberally brush on the glaze, flip the meat and let it ‘set’ and caramelize. Use your intuition here. It should look good, not burned. Flip, and glaze the other side as you did the first. Repeat if desired – the more you do this glaze and flip deal, the more the flavours in the glaze will come through. Luckily, because of lots of intramusular fat, it will be tough to really overcook the shoulder steaks to the point of toughness. What would cremate a loin chop, will be just dandy for a shoulder steak.

Do whatever it is you do to test for doneness. I either press on it with my thongs, or use a meat thermometer if I’m not sure. Cut into it if you want. Enjoy. 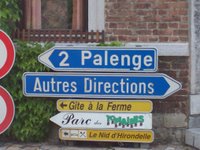 I’m a European travel addict. And yes, I know there’s more of the world to see.

To date we’ve been to England, Denmark, Germany, the Netherlands, Belgium, France, Spain, Switzerland, Lichtenstein, Italy, Vatican City, Slovenia, Austria, Hungary, the Czech Republic, and Poland. And if you think traveling to Europe is all the same, you obviously haven’t seen much of it. A city in Poland is nothing like a coastal village in Spain. If you don’t believe me, your loss.

Why travel? Rick Steves describes it as ‘accelerated living’ – and I agree. You experience more in a week of travel than in a year at home. Not a fact, and yes, an approximation, but you get the idea. It’s also an invaluable education in geography, language, history, culture, food, and human nature. So I guess if you don’t value living life, intense experience, or an education about the world and humanity – then don’t travel abroad. Or I guess there’s always traveling to get drunk and tanned. 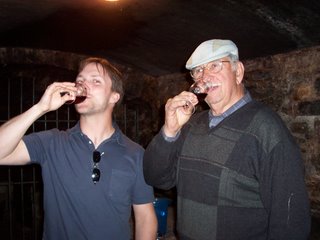 The man to my right is Mr. Chenu-Lefebvre, vigneron and winemaker at Le Moulin Aux Moines, Chorey-les-Beaune, in Burgundy. I didn’t know it at the time, but he’s changed the way I’ll think about wines for the rest of my life. Why the big fuss? Well, to most, including myself prior, ‘integrity’ is not an ingredient the modern wine world looks for when buying a wine. This man lectured me on integrity. He scoffed at dark coloured pinot noir wines. Red wines, he says, were not dark in colour 50 years ago – they have to add other varietals to get the colour that sells well now. ‘La Mode’ – or trendy, he calls it. He scoffed at modern vinification methods including refridgeration to cool fermenting must. He uses tubes, gravity, and his 1000 year old cellars to chill wine. He is one of the old-timers that believes that wine is made on the vines, and the vinification afterwards should simply reflect the grapes: how stressed they were or were not due to weather, soil conditions, and other factors that nature controls. He believes that wine making is a natural process, and mucking about with it is disrespectful. He preached that making wine to suit a modern palate just because it sells, and not to reflect the grape or the terroir is ridiculous and offensive. These were concepts I’d hear again and again.

Skip ahead to the Cote du Rhone, near Vaison la Romaine. I had the privilege of staying up drinking cheap bubbly with a vigneron widow and a local vigneron, Sebastien, who tends vines in the Chateauneuf du Pape AOC. They told me of the woes of french winemakers – how new world wines were forcing some producers to tear out their vines. The once thriving french wine industry has hit the skids. But Sebastien spoke of hope. He feels that this pressure will force the poor terroirs to no longer be planted with vines – leaving only the very best plots of land to produce only the very best the region can produce. And that the inevitable quality that will result will allow them to maintain a respectable price and demand for the flavours of their region. Personally, I think they’re going to be just fine. There may be more wine supply, but there’s also a lot more humans kicking about to consume it all. And in these times, we’re damn efficient at consuming.

While debating some of my new-found wine wisdom over dinner with Robert and Liz, our Tuscan foodie-friends, Robert insisted I watch an incredible film by Jonathan Nossiter called Mondovino. I think I’ve watched it 5-10 times. Get if from your local library, or rent it if you can find it. Brilliant documentary about people in the wine industry, and the trend toward the commoditization of wine – making it the same across the globe so that it sells well, at the cost of regionality. I totally appreciate that some people don’t care. In my opinion, it’s a sign of the times. People are cluelessly detached from what they eat and drink. I will have to write another day about this, as there’s too much to say. But in general – people used to give a shit about food and drink, and the last couple generations have gone and right fucked it up. Wonder bread? Cheez Whiz? Kool Aid? McWhatever, microwaveable dinners? Come on. That’s embarassing.

Onward. About wine, right? Right. My conclusion will suck, because trying to come to a conclusion about wine is not dissimilar from trying to conclude about religion. Understanding is a life-long journey. Blasphemy? Isn’t wine the blood of Christ? I hope to post more about wine in the future, but for now, go get a copy of Mondovino, and care a bit more about what you’re drinking and the people making it.