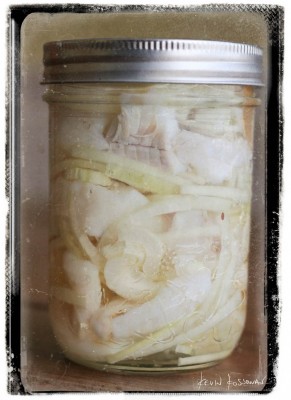 This is a bit of redemption for me. 2 years ago, I wrote about pickling whitefish, and failed at documenting the recipe or approach to it. So this time around, I’m taking notes as I plan on doing this often. It’s not fussy, it’s tasty, and strikes me as the kind of thing every good northerner should be happy to tuck into with a beer or vodka. So when the fish in the photo below came into my life, I knew its fate. I’ll never forget this fish. I’d never caught a whitefish. And for whatever reason, they kept popping off the hook while just coming out of the ice hole. Flopping in the hole, no hook or line attached, trying to sort out escape. So I panicked…or rather…thought quick on my feet. Whitefish number one that day was scooped out of the hole with my kitchen spider [which does only a marginally good job at de-slushing a hole, btw]. The bad boy in the photo below, which looks kind of like a minnow in the photo but was actually a foot and a half + long, I scooped out with my hand – my reflex being to plunge my arm down the hole after it, and fling it out onto the ice. Some good laughs were had. This one fish made 3 pints of pickled fish.

So here’s the deal with the pickling. Fillet. I took the rib cage off via filleting from the back toward the abdomen. The bones go soft in the pickle, so no biggy if they’re left in. Cube the fish into 1X1″ pieces. For 3-4 fish: 1 cup salt, 5 cups water. Make a brine. Let the fish sit in the brine for 96 hrs. Drain. Cover fish pcs with white vinegar. Let soak for 96 hrs. Drain. Prior to jarring, make and chill a brine solution of 1.5 cups white sugar, 2 cups vinegar, 2 tbsp pickling spice or other aromatics of choice. Pack jars tightly, pour on brine, and eat from a week later to a few months later. Too long and the texture goes mushier – when fresh and with 96 hr cure times, the texture is pleasant, dense, and if you hate pickled fish, these could easily change your mind. They changed mine. I’m sure you could use less salt and sugar, but to me, these are like junk food – like tying into a bag of chips. Now: patience. Hard to wait that first week. Need to catch more whitefish. 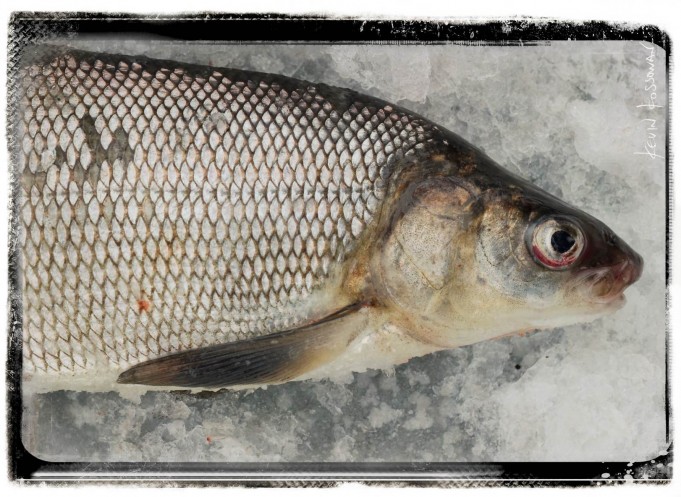