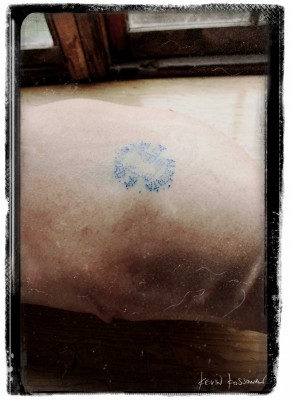 ‘Pig Day‘ as it’s known around here is the big day we cut pigs to supply us for the year. We buy no other pork. If we run out, we wait for the next pig day. And we pretty much had run out, so I was particularly excited to get my hands on a whole hog again. And it was a big hog this time – 250 lbs. The fantastic farmers had agreed to keep the pigs a good month and a half past the kill date of all their pig-buddies to accommodate our butchering the pigs at home. There’s only one requirement for butchering at home: cold. Which itself dictates date. Late August and even September are chancy – can’t have a pig in the garage when it’s 30C like it was in September. By the latter half of October and into early November, it’s dipping into freezing at night at least, with day-time highs in the high single digits. My garage becomes a big walk-in cooler. Wait too long and you’re working in a walk-in blast freezer, also a problem.

‘Pig Day‘ starts with us heading out to a meat processor about an hour out of the city to pick up the pigs. They kill them, gut them, split them, de-hair them, have them inspected, load them into the vehicle, and hand you a baggie of offal if you want it all for the low price of $55/head or so. They kill on a Tuesday, and we pick up when they open Friday morning, so the carcasses have a good chance to chill hard in their coolers. We start cutting shortly after 9am, go all day with a break for a wood-fire grilled steak of whatever looks nice off the table, and go until dinner – which is always roast pig head. That dinner is always one of the best, if not the best of the year for me. Lots of fresh air, camaraderie, fresh pork and garden vegetables, washed down with a variety of apple cider, apple wines, brandies, etc. This year we even had a blind wine tasting with 9 folks to sweeten the day even more. It’s a special day. 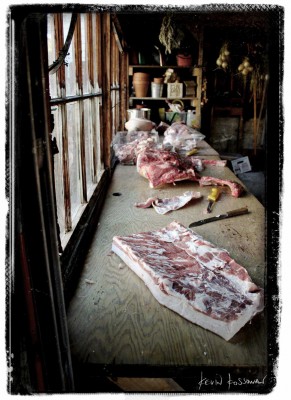 So what to do. So many options. In my opinion, there is no wrong way to cut a pig, just a million choices, that’s all. I went into this one with probably the best game-plan I’ve had to date. I had thought through all the primals and listed what I wanted to make from them, which guided what and how to cut each. Here were my choices this year:

Shoulder. Shoulder makes my favorite slow-cook roast and confit cut – needed a few convenient roasts for that. Wanted a serious amount allocated to sausage. The hocks went into a brine pot I’d prepped the day before, to be smoked in a few days. If only the whole pig were made of shoulder…

Loin. One side was simply cut into 5 bone-in, fat & skin-on, 4-5 rib loin roasts. They have about 2-3 inches of rib on them, and are a sexy roast presentation wise. The other side was taken off the spine, and split in two. Half was cut into 10 thick fat-on chops, the other half was kept whole boneless and skinless for brine-curing and smoking – its back fat reserved for dry curing.

Ham. Hocks brined in pot. Deboned, isolated inside round and outside round essentially. I wanted to dry cure a piece, so the inside of one was cleaned up for that, the outside designated for roast, with lots of trim for sausage/ground. I’ve found that if I don’t make a conscious effort to allocate to trim, there is none. The other ham was separated the same way, but both inside and outside rounds going into the brine pot. My kids dig cured, smoked meat and ham, so ham I shall make. 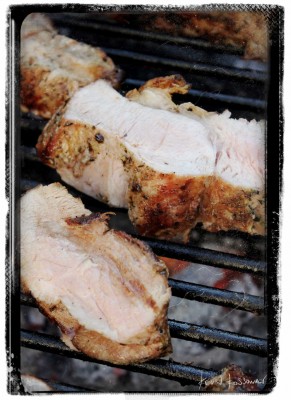 Belly. Ribs off and lean to leave it for the bacon – I try to save them for the following summer. The photo just above shows the remaining belly slab’s copious fat. They were trimmed up, cut into 4-6 slabs per side, and reserved for curing and smoking. My kids love bacon. Ok, everybody loves bacon.

Other. This is a pretty long list, and significant contributor to weight. We roast one head, but because a friend I cut with doesn’t want his, the other gets trimmed out for sausage, the side of the face removed [cheek, jowl, etc] for dry curing. There’s a lot of meat out of a roast head – 5-7 lbs. Then there’s the lard bags – one of leaf lard [hugest I’ve seen to date], and one of trimmed back and belly fats. They’ll be rendered for pastry dough. Trim – I took about 20 lbs for ground & a fresh sausage batch I’ll make tomorrow morning. Then there’s the offal bags with tongues, livers, hearts, kidneys. Tenderloins. Oh yeah, those.

Once we got through my pig, we did 2 more, with others choosing how they wanted to use the lovely stuff. What I’m now left with is a pile of choice in the freezer still, and cuts that suit my family both in size and intended preparation. Back fat, inside round, jowl for dry curing right away. A pot full of curing hocks and a couple ham roasts needing smoking in a few days. 2 big bags of lard needing rendering. A few slabs of belly curing for bacon. A big tray full of trim that I ground the day after, with a batch of fresh sausage to tackle. And a pot full of pulled head meat. And full bellies. 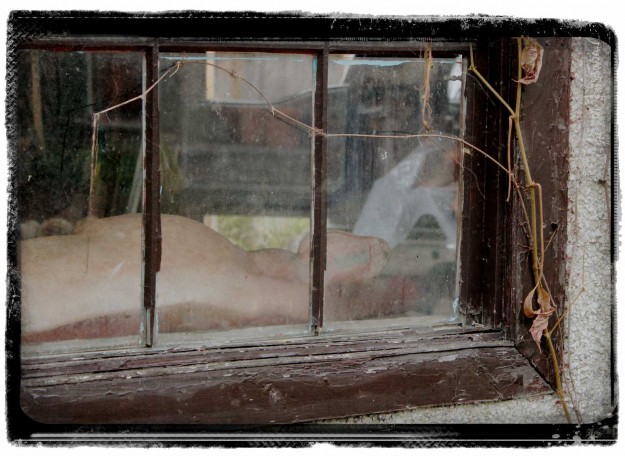