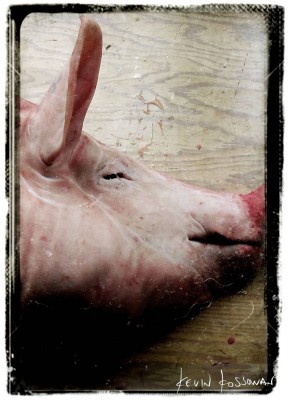 A while back, my good friend Yen told me of a dinner he and  his girlfriend had enjoyed in Boston – a confit’d pork head, finished on high heat in the oven. Melty-apart pork and crackling skin are two things I’ve grown to adore pork for, so when butchering the Nature’s Green Acres pig a couple days ago I was resolved that the heads would be put entirely to good use. I normally carve as much trim as I can out of the neck portion, and remove the sizable jowls to cure or grind. We’ve tried the odd bit other than that, but generally the rest would go into the bin. Never again.

The key part to understand is that eating pig head is not a shock-tactic-to-increase-one’s-awesomeness, nor is it a notch in a snobby-foodie-belt. If you like pulled roasted pork, you will like this – and I’d challenge anyone to say they wouldn’t to a blind tasting of slow cooked shoulder roast vs. slow cooked head roast. What’s also important here is there is a serious yield of meat in a pig’s head.  In my fridge I have a half head pulled [like you would post roasting a chicken], and it yielded 1.6 kg, or 3.5 lbs of meat. That’s 7 lbs per head, not including the edible skin crackling.

Sadly, the well-known-but-liked-by-the-minority ‘head cheese’ has given pig head a bad rap, in my opinion. I’m not a fan of aspic or jellied meat preparations, so it certainly didn’t help my cause. But forever moving forward, I will be fond of, and never again waste, the meat in the head of a pig. Personal favorite bits? I really liked the lower jaw meat, and was shocked how much I enjoyed the eye meat. I know that sounds disgusting to many, but once the inner white bit and surrounding bit is removed, the remaining meat is actually really nicely textured. Don’t knock it ’til you try it.

Method: slow roast at 150C or so for 5-8 hrs, then finish in the oven at 200C until the skin becomes brittle. Pull it apart, season, and enjoy. In this case, the head was split, and I strongly recommend skin side up. I did one skin up, and one…inside up – because it fit well in my largest roasting pan that way. Pig heads are large items. The skin down one still crisped up once flipped, but the smell of roasting bones [skull] was initially not that pleasant.

Below: what’s left post-pulling meat from the head. 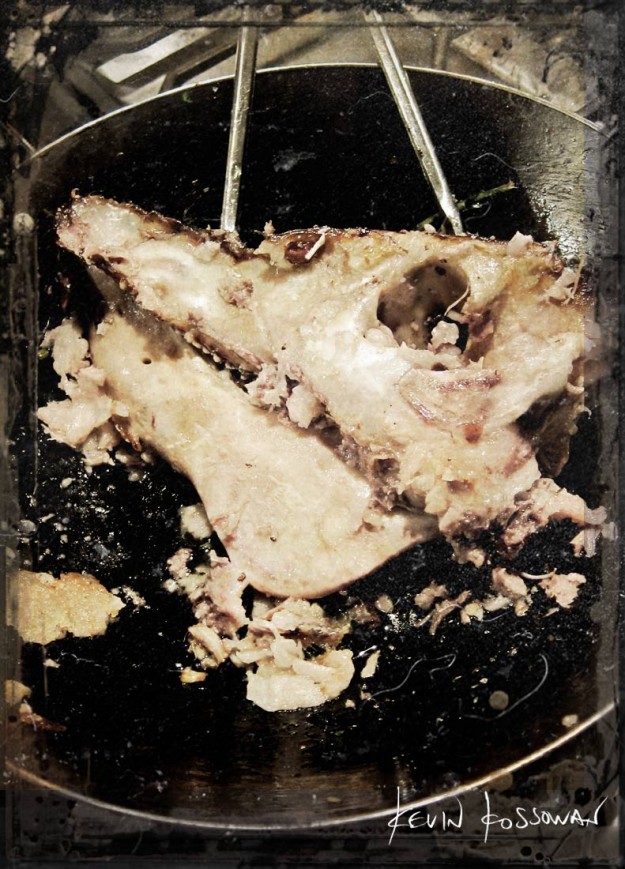