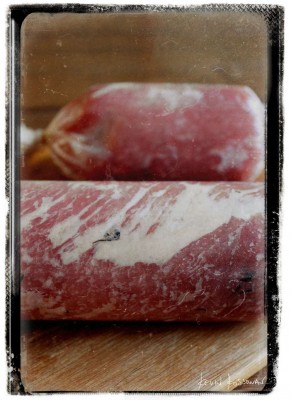 I started the cure on these ham cuts here. They were cut from the rear side of the ham, and post cure I decided that rather than stuff it into a bladder as is traditional with Italian Fiocco, I’d cut it in half and stuff it into some 61mm protein-lined clear casing I had on hand for making saucisson sec. They both fit into a single 24″ casing, which I cut into two pieces. I seemed to recall someone online mentioning soaking the casings pre-stuffing, and I can attest to it making stuffing far easier. Tied the casings with kitchen string, wishing I had splurged on a pair of pliers to put wire clips on the ends.

They were hung overnight in the cellar at 8.3C and 50% RH, which is both too cold and too dry. The humidity’s on its way up though, as I’ve reintroduced the bucket of water with wick for the winter. The hanging meats will also help bring it up. Last winter it was up in the 70% range.

This morning, I got to play with Penicillium Nalgionvense for the first time. Frustratingly, it’s yet another charcuterie product that is locally unavailable, so I had to buy it from the US. I’ve had a concerning lack of healthy white molds in my cellar over the past few months, so I’m reintroducing some desirable molds to see how it works out. The photo below shows how much [1/8 tsp in a ramekin of tepid water] I used, let it soak overnight, then applied it in the morning in a fashion similar to basting meats in a fry pan with the cooking fat. Spooned it on, coating the whole thing a couple times over. I’m extremely curious to see how long it takes to bloom and do it’s thing. I’ll post an update on the mold development and finished product over the coming weeks. 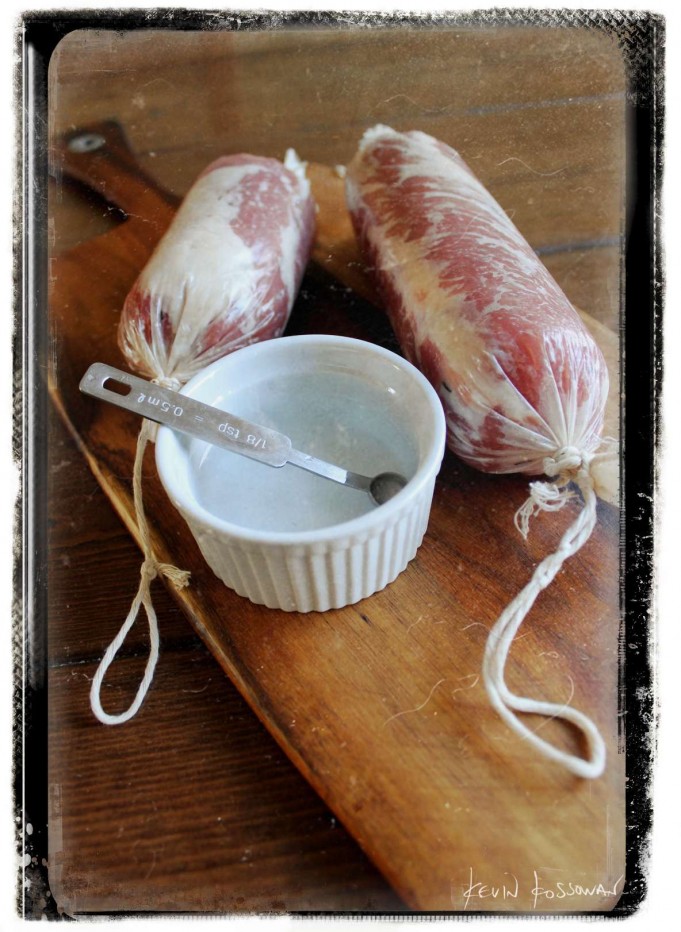