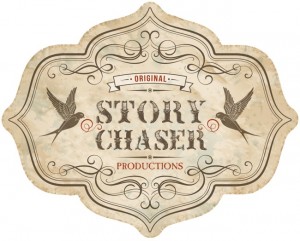 I feel like I have a little explaining to do, as I’ve been getting involved with projects that may seem a little out of the blue, but aren’t. Since the snow fell, the cold came, and the outdoor food world froze into ice, I have had time to park myself at an imac and get stuck into building out some of the businesses that were conceptualized through this last growing season.

Story Chaser has finally been born. The video production opportunities are increasingly piling up and it was well past the time to put together a team to handle the workload – it’s already more than I can take on. One of the cool pieces of the puzzle is we’re going to focus on producing hunting, fishing, and agriculture video production – a niche that will be really fun to fill. I had no idea there was as much work as there is in the video production world, and can’t believe the scope of the projects we’re already working on. I feel like I should be sending Daniel Klein a royalty for getting me started down this path.

Shovel & Fork was born from the workshops I put on over the past season – which I put on because folks had been asking me to for years. I learned a few things doing them. First, and most importantly, is that I’ve long known that I really don’t enjoy being a teacher. Learned that being a music teacher through university. Not for me. Secondly, I learned that a lot of folks really enjoy learning in that hands-on way. So rather than tap out, which was my intent, I’ve teamed up with chef and culinary instructor Chad Moss who will rock the instruction bit. We’ve also built the gig to incorporate folks with other skill sets and knowledge to teach workshops in their area of expertise – not only in #yeg but elsewhere too. It’s become a really, really fun project, and is already changing the landscape of the food scene here. Love it.

And there’s more on the way, including a rebuild of this very site which will focus a fair bit more on KevinTV than it does now. Lactuca will continue to consume a fair bit of my brain, as we figure out expansion and employee logistics for the coming growing season. In the end, it turns out that I’m really, really enjoying tackling entrepreneurial projects that create vast opportunities to do projects with social good pieces attached. So much fun. I’m really, really grateful to those of you who support what I do and make it possible. I will long be in your debt.