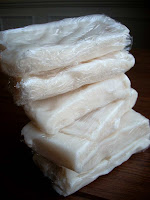 Why, oh why, have I never done this before? I’ve cut 10 sides of pork in the past 13 months, and never, not once, did I render lard. Stupid. I will forever and ever, from this day forward, consider the leaf lard in the pig a very valuable piece of yield. Not only is it excessively easy to harvest – lightly attached on one side around the tenderloin area – it is the choicest of fats for making pastry dough. Or frying potatoes [ok, duck fat and beef tallow have good reps here too]. Or frying, say, pork. Or, well, anything, really. So why didn’t I try it? Stupidity. Only saving grace is that it wasn’t wasted – it was simply ground before. Never again. 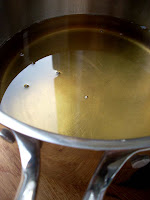 The process is simple, and has been well documented here and here. I did about half of my stash at 120C in the oven, it took 8hrs give or take, and the smell made me want to barf. I don’t understand. It’s cooking pork. Creating a product – lard – that is very neutral in general. Some people do it outside, and I don’t blame them. I’ll likely stick to the oven for the heat control, and I found that any nausea is quickly forgotten once you’ve gotten on with using the stuff.

I found a lot of methods of storing the stuff. Many use jars, which unless you have a straight sided jar seems like an annoying idea to me when it comes to trying to get lard out. I also have had bad luck breaking jars in the freezer. One cool idea was muffin tins to get individual portions. But I swooned when I read about pouring it into a cake pan of some kind, so that it can be cut into butter-like sticks, and wrapped in convenient portions – which is what I did, illustrated in the photo top left.

So thank you, lard, for filling a void in my life I did not know existed.