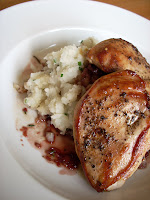 It’s a notable occasion. This is the first game to enter my kitchen this fall – ruffed grouse. We call them ‘chickens’ more often than not, and they do have a similar texture and flavor. Except for their distinctive, almost ‘sharp’ flavor. They have a definite sour, evergreen gaminess to them that is definitely not chicken-esque. Kind of like lamb is ‘stronger’ and different, so is this. It used to be my favorite game of them all. That is until moose ‘veal’ was discovered, trumping all game meats, imo. But ruffed grouse is probably #2. And I’ll be geeky and differentiate: spruce grouse is also common, but is dark red instead of white fleshed, and tastes like a bird that eats in spruce habitat. As opposed to ruffed grouse, who often have crops full of clover. Ruffed grouse may have #2 spot, but spruce grouse is a lot further down the ranking list. 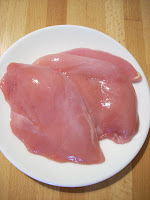 Just fyi, the photo on the left is what the meat looks like uncooked.

The potatoes were pulled from my in-laws’ garden a few hours ago, the rosemary from my herb bed. I cook this style of dish a lot with game, and mostly, I remembered tonight, because it’s really damn lovely.