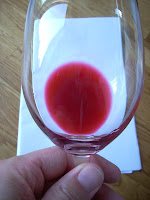 As with quite a few other items lately, I’m posting about making ‘Saskatoon Wine’ because there seems to be a hole in online information about the topic. After doing some research, I realized that it’s partly because it’s very Canadiana to even call them saskatoons. Amélanche, juneberry, serviceberry, shadberry are more common names elsewhere. I’ll use the terms interchangeably, just to spice it up with a tsp of confusion.

Can a serviceable, decent wine be produced with these berries? I’m on the quest to find out.

First step. Pick lots of berries. How much fruit/yield of juice/yield of mature bottles? Unfortunately, that answer’s requiring a lot of R&D.

The biggest issue I’ve had with serviceberry wines in the past is they taste watered down. The fruit character was solid enough – but watery. Doing research on the very few recipes kicking about, I found out why this may be: adding more water by weight than berries is the norm. WHAT?!?!? What sense does that make? If you did that to grape wine in France, I think they’d string you up in the town square. Well we found out one possible reason – crush juneberries and they yield little juice, so much so that making a slurry essentially doesn’t happen. I thought ‘okay, clearly there is a reason for the water.’ We added water until we had a nice runny mash, and ended up content at 0.55L/Kg of fruit. Traditional recipes are more in the ballpark of 2.20L/Kg of fruit. That’s a pretty severe difference. I felt baldy about the water I’d added until I did those calculations.

This being my first run at this, we used a giant potato masher to crush the previously frozen fruit. Worked pretty well. I also took it for a spin with my kitchen immersion blender – which quickly would plug up with the robust berry. But I’m going to use my fruit crusher next time in hopes of more juice yield right off the bat, so that I can reduce the water addition – working my way towards zero water/kg if I can. How else can a proper wine be made?

Adding large volumes of water to your must completely screws it up. The pH rises out of the mid 3 range that you want, into 4 territory. Titratable acidity is equally thrown off. So you have to intervene to adjust the acidity to avoid a limp, sickly wine. The sugars get dilute too – so in goes sugar to balance the water addition. And that’s with a quarter the water normally recommended. I clearly need to do some juice chemistry on un-watered-down juice, if for no other reason than to understand the juice’s innate chemistry better.

This is where my water gripes dissipate and it becomes a joy to punch down the cap of skins/berries 3-4 times a day. Post inoculation of yeast, the bubbles quickly lift the solids to form a 3” cap or so. In time, mine became about a foot thick. Reincorporating it prevents off-odors, keeps the must safe from oxidation and bugs, and helps with extraction of color and phenolics. I did as warm a fermentation as I could muster – getting the must up to 27C at the peak of fermentation. That heat is necessary for extraction of color and flavor as well – from the skins. I achieved close to my heat goal of 27-32C by sticking the bucket in a small bathroom upstairs with a light left on to generate some heat. It also happened to be warm outside – I can see having to get more creative if fermenting in the winter here. All of this proceeded as expected, and I tested S.G. daily, and temperature twice daily.

My fruit press did a fine job of this – far easier than pressing apples, as the skins have been…um…decomposed…party by the yeast’s party already. There was a lot less pomace than I expected, which is a promising sign that the berries really break down – implying potential for removal of more water.

Although yeast-laden, raw, and young, the wine actually tastes like a nice wine, and smells the part too. Bright fruit, good acidity on the palate – very optimistic of its matured, post-oak state. It’s quite bright red at this stage – rosy red, as opposed to dark or purple.

I will be oaking this batch with American oak, medium plus toast infusion spirals from the Barrel Mill. Try to get these things locally. Hah. I ordered mine direct online. One thing I’ve learned lately is that wine shops don’t know much about making wine around here. I went to two shops asking for malolactic culture and got blank stares, was asked if that was malic acid, or worst ‘is that for making beer?’. At a wine shop. Good grief. Praise online shopping.

More posts about this as things progress.