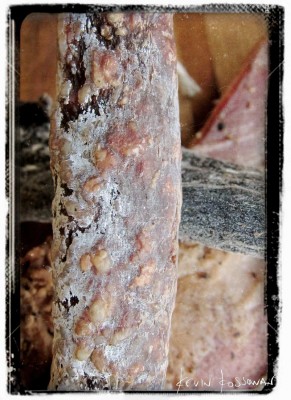 Moose sausage typically doesn’t get me excited. It’s generally made by local meat shops with pre-fabbed 5-gallon-bucketed mixes of ‘cure’ and ‘seasoning’, jacked up with pork to tame the flavor and add fat, resulting in a sausage that tastes like non-game something-or-other akin to a factory produced sausage item from a box store. Not always bad, just rarely that good and never great. Wow that’s a tad harsh. Truth hurts. [I actually feel for the butchers, as I would not want to defrost, de-hair, and trim out the often multiple bullet wounds from game animals shot by others. They probably don’t want to either.]

I’ve made fresh game sausages with equally weak results. No boxed seasoning, perhaps, but still not something I’d be excited to tie into regularly. But that tide has changed. A while back I put up a batch of pork saucisson sec, and made a batch with this year’s calf moose to give it a go. Test run. Success. And to continue with my quasi-snotty french names for these products, I’ll be calling these ‘saucisson sec d’orignal‘.

This morning I finished a couple pieces of this and my brési with a hit of smoke. I’ll give them a few days to mellow out the fresh smoking before tying into them again. Smoke, like many things, is better with age. I may make the next batch a tad leaner, but other than that, very pleased. How to make it? Chacuterie‘s recipe for saucisson sec, substitute moose for pork shoulder. These took a month to cure at 4C and 65-70% humidity, and could stand to be a bit drier still.

[the photo is the saucisson atop brési atop guanciale – Christmas is a time to taste charcuterie, apparently. sweet]