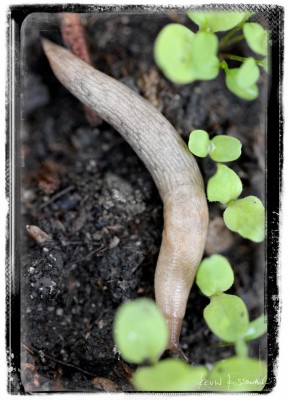 This is not a complaint. Every time I feel like I want to complain about this year’s inundation of slugs, I consider what my yard was like before when it was an expanse of lawn, with zero life in or near it. Or I think about the west coast with their huge slugs the size of your index finger – these look big, but only because of a 100mm lens. And I’ll take biodiversity over convenience. I ran into a friend who farms veg organically who described slugs as an urban problem – in a cultivated field there’s too much soil for them to cross before they arrive at a plant. In cities there’s lots of habitat. A con to urban ag perhaps? A manageable one, if so.

These things are seedling mowers. It took me a while to figure out that the house sparrows kind of nip and shred seedlings once about an inch tall, but slugs will make baby seedlings a few days old disappear. I had a patch of beautiful seedlings, went on holidays, came back and they had vanished. So I declared war. I tried the beer trap thing, but failed epicly, so I resorted to good, old-fashioned picking. With tongs, because you only have to try to scrub slug slime off your hands once before figuring out that’s something worth avoiding. It’s kind of like the goopiness of nasty fish slime with the tenacity of evergreen sap. Picked a hundred or so a day the first few, then it dropped into the dozens, until a week or two in I’m only finding a couple every morning. I can live with those numbers. I also can live with getting used to bugs. These things grossed me out before. Now my 5 year old and I hunt them in the morning like they’re easter eggs. Well. Kind of like that. 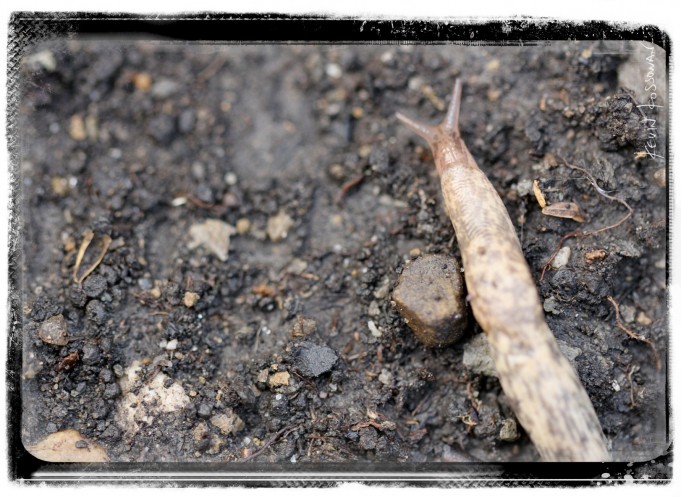