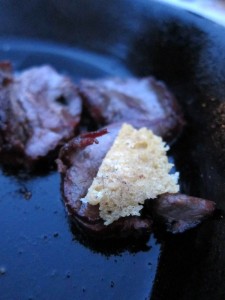 It was the last pack from the 2008 antelope – an animal that had become revered as the game meat of choice over the past couple years around here, so tying into it was an event. A ‘leg roast’, which in this case meant the whole leg below the hip and above the knee [think a larger leg of lamb?]. It had stored well enough, I had a fire going to grill a piece, and we’d see what inspired us with the rest. Turns out the whole leg ended up over the fire with various tweaks of seasoning and herbs. I’ll spare you the photo essay and skip to the memorable part: smoked leg of antelope fried in 8-yr old vermont cheddar fat, topped with that cheese’s fried crisp.

What we did: It was a piece maybe the diameter of your wrist/forearm, and we smoked it well off direct heat, but the coals were quite hot so it still was a fairly hot smoke. The meat went a rich tan-burgundy in color, and retained an extremely tender texture [something notable about this antelope in general]. While it rested, we fried the cheddar in a cast-iron pan over some coals, collecting the solids as the fat ran about the pan [take it off when it starts to deep fry in its own fat kind of like how bacon does when it’s near-ready], and set the fried cheese aside to crisp up [it crisps up when it cools, not in the pan]. The smoked meat then went into the hot cheese fat for a very-quick fry. Then the chip was cut up and went on top. Simple, rustic, damn tasty, and memorable. Great texture contrasts, great dairy funk, great richness added to a lean meat. Certainly worth a go again. The downside: it takes 7 years to get drawn again for an antelope tag up here – so it will be a few years yet before I can enjoy this again.