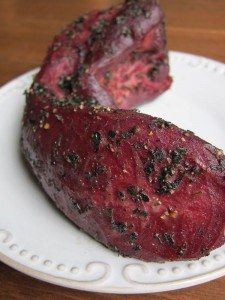 I was fortunate enough to be invited to an event that I’ll link up as soon as some of the attendees post about it. It was a fairly large pot luck comprised heavily of bloggers, and the hostess shared similar pot-luck ethics as I,  so it was highly enjoyable. My dish? Cured and smoked tongue of moose. Not your average dish for a pot-luck, for certain. I know a few folks who if served this wouldn’t  touch it with a 10-thousand-foot-pole.  But that’s okay – I figured that type of folk weren’t invited.  It was cut really thinly, and was so approachable that my fussy 3-year-old even popped back a few pieces – akin to a heavily cured and smoked ham. I therefore conclude [right or wrong] that even super-fussy 3-year-olds can be more adventurous than fussy adults!

Cured in dry cure for a week, cooked in a bag under-water for roughly an hour per pound [1.03kg, in this case] at 200C, peeled, rubbed in oil+ sage+oregano, then smoked with applewood for roughly 3-4 hrs. I used a slicer to get it thin. The whole thing worked out exceptionally well. I’d originally planned on finishing with fleur de sel [among other things], which upon tasting was clearly a poor idea, as the week in cure made this more than salty enough. It needed nothing. I settled on serving it plain, paired with a too-young-but-still-appropriate saskatoon wine. Any chance I get to serve wild game meats with wild fruits from the bush where they live, I take.

One thing of note that I will rely on others’ photos for [again, I’ll link up shortly]: I cut the tongue in half, roughly, and sliced each half separately. The back and front of the tongue not only are different shapes, the nature of the meat is shockingly different. The front, or ‘tip’ part if you will, was much darker, denser, and uniform in shape. The back ‘throat’ section varied in neat shapes, and almost looked more like a pork product. Interesting.