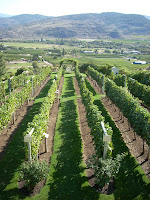 I’m going to try to make this short. There’s a part of me that finds it quite funny that a good number of producers ditch the Meritage concept. Meritage is a brand name for ‘Bordeaux-style-blend’. My big beef is: what then is the non-France name to apply to the Syrah/Viognier blends? No ‘Hermi-Meri-tage’ brand name? How about the southern white blends? How about the Sauvignon Blanc/Semillon blends? Bah. Me, being one to hate on people who poop on ideas when no better idea is presented, offer the following: how about the region gets their collective act together and only rock what the terroir does best, and the world will know what that is and want to buy THEIR ‘where’ it’s from, just as in France or elsewhere. I’m patient. It’ll happen. I was a little startled how high some of these scores were, and how high the average scores were – although – it is the best foot forward for many of these producers, so one would hope they’d score higher than the standard merlots or cabs.

Shot of anise. Good concentration, then soft and light wood. Tart fruit. WICKED texture for the area. Clearly a leader in texture. Red fruits, maybe a dash of blue fruits – all very nice quality. Cherry notes are super pure. Very happy with the mouthfeel of this wine, with good concentration, nice red and blue fruits = solid on paper and I liked it. I loved this wine second time around. [Scored the 2006 90]

Super PURE red fruits, and no oak whallop typical of the region. Clearly a different class. Medium concentration. Touch of pepper. Rich, fruity, tannic and dry. Nice structure without being ridiculous. Very, very nice. The purity of fruit puts this into the 90+ territory immediately. [scored the 2007 89]

Soft, nice fruit, nice soft oak, very jammy in a very postive way. Super intense, with an oak finish. Very nice wine, I swear I was tasting this finish for an hour or so afterwards.

Stylish, as always from this producer, with strawberry and pepper. Touch of leather? Fine. Poppy fruits, bubble gum vibe [but good], super-well styled. Longevity doesn’t seem to be there ie there’s no big structure. Hard to say how this would age. Very solid, dig the strawberry and pepper, and overall style. Very good.

Impressive. Subtle cassis and one of the nicest Bordeaux-style, merlot heavy Meritages I’ve had. It’s not an oak bomb on the nose. Nice fruit, round, and supple – all rare descriptors for this region’s merlots and Meritage. Very dry, nicely concentrated. Not just good, it’s into very good to excellent territory. Someone actually got it right, and it can be done. I was surprised to see the under $30 price point – can compete with the $35-40 range, therefore one of the best QPR Bordeaux-style blends around.

Light, fruity, woody, with nice little pops of red fruit – strawberry and raspberry. Like that they were subtle as opposed to the syrupy approach I’ve seen. Solid. Well made, thin with structure and intensity. Really good – just not my style.

Rosy, juniper = flowerbed. Raspberry concentrate, lighter oak than average in the area. Very solid. I can’t say I dig the intensity of raspberry, but generally like this wine.

Wood. Round fruit, intriguing. VERY dry, but lots going on. It’s so dry it strips your mouth of all its senses. Most would hate the dryness alone. Becoming-ubiquitous style of blend that’s still not my bag.

HUGE step up over their other reds. Crazy cassis/blueberry going on that is really nice. Dry. Okanagan-esque. Very nice nose, more average palate. Shockingly aromatic given the lack of quality elsewhere in their reds.