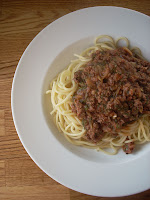 Calf elk, fried in beef fat. And rather than canned tomatoes – jellied beef stock with tomato paste. Add a whack of minced char to get green veg into the family. That’s one hearty meaty-meat sauce. High on the QPR scale.

I’ve been really reluctant to go the route of beef stocks with game preparations – game stocks for game meats, right? I’ve made my share. I’ve followed Escoffier’s rules. I’ve followed my own [which involve far less cooking time, especially with poultry]. I have failed to make a game stock that I find appealing. Beef it is. And so far, thumbs up.

Coming Up: the shaggy manes are popping through the fall grasses, the bush is starting to stink from the ripe high-bush cranberries, big game season is starting soon, and the garden harvest is coming in.