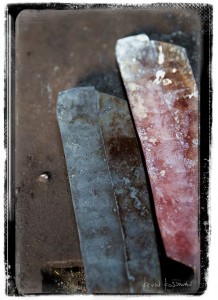 Japan was not really part of the plan. But I couldn’t be happier that it happened to me. Some backstory for those curious:

Kevin Kent [owner of Knifewear]: “man, when I go to Japan I do so much cool shit, and wouldn’t it be rad if we could capture some of that radness on camera”
Me: “yeah man, sure would”
Kevin Kent: “dude, let’s do it”
Me: “game on”

It wasn’t quite that simple but it might as well have been. So the original concept for the project was to shoot a short film about Kevin’s crazy adventures in Japan – he goes once or twice a year to meet with suppliers, distributors, and have a great time. We had agreed that shooting the shit out of the trip while I was there was a good idea, and just prior to departure the idea of shooting ‘producer’ or ‘craftsman’ shorts would make good business sense for Knifewear – to help tell the story of the blacksmiths who make the knives they sell. Cool.

Two days into shooting, something fun happened though. We had tossed around a black & white treatment from day one, and I put together a sequence of the first blacksmith we visited to evaluate whether black and white was indeed the wise move, or whether colour was actually better, despite our bias. Turns out colour told better story, but the snippet also made it very obvious that we had way better quality material than we’d anticipated, and way more content than we anticipated with more than a week of shooting ahead of us. Didn’t take long before we’d agreed that a long doc was in the cards. It’d be rude not to. So we started shooting with a different end in mind, and SPRINGHAMMER was born. A spring hammer is the tool the blacksmiths use to hammer steel rod into a knife. Sounded like a good name for a rock band. Or a documentary about Japanese blacksmithing.

The trailer below will get modded as editing moves forward. A large portion of the film will be subtitled as all the blacksmiths interviews were in Japanese, and it will explore both the making of knives, and where blacksmithing has ended up [and is headed] having started from a culture around samurai swords and agricultural tools. We’re hoping to release the thing in 2014 at a film festival, after which it will be available online.