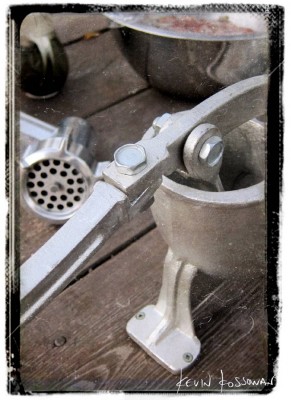 Coincidentally, when Allan called me about his blood glut problem, I already had pork from the recent pig-butchering on deck – slated for Rhulman’s ‘Master Pork Sausage’. Truth is, I had purchased a new meat grinder from Halford’s and I wanted to give it a go really badly. So the morning before making all that blood sausage, I was at home making this.

Two notable pieces here for me. First was timing and location. I woke up to -3C, and rather than fuss with chilling everything throughout the process, I decided to simply do it all outside in the natural walk-in freezer that living up north provides at this time of year. Other than my hands being slightly painfully cold, I was pleased at how cold everything was throughout the process – an important element to proper sausage making not just for health safety but for texture. Having decided this was to be my location of choice for many months of the year, I christened my outdoor patio table with screw holes to mount my sausage stuffer. Making sausage in the frost is a treat, and darn sensible.

The second notable piece: recipe evolution. I’m a big fan of ‘Charcuterie‘, but generally have found the garlic amounts to be way too forceful for my palate and nose. This batch I reduced it by half. Half. That’s a significant change. And know what? It still makes my freezer stink when wrapped and packed in there. I still find it garlicky. Which begged the question of whether or not I even want garlic in my fresh sausage.  We just put leek and onion in the blood sausage – and I quite prefer that allium approach to garlic, not just in sausage, but in my day-to-day cooking. There are leeks in my garden that need to be used up. This initial doubt then begged whether the book’s recommendation of good red wine in the sausage was a good one – I would not generally pair fresh pork sausage with red wine, so why put it in it? The thought of a big Shiraz in the pork sausage literally makes me think: ‘ew’. I immediately thought: apple wine. Way better pairing imo [as would be most white wines], and introduces a terroir element. I wondered why no fresh herbs [abundant right now, but not once we get snow]. Add to that a slight tone down in salt, and I think I’m onto a recipe that will speak to my family’s palate [and my own], have something to say about time and place with all the flavors having come from our yard in the late fall.

Took more meat out of the freezer – can’t wait to give this theoretically lovely recipe a go. 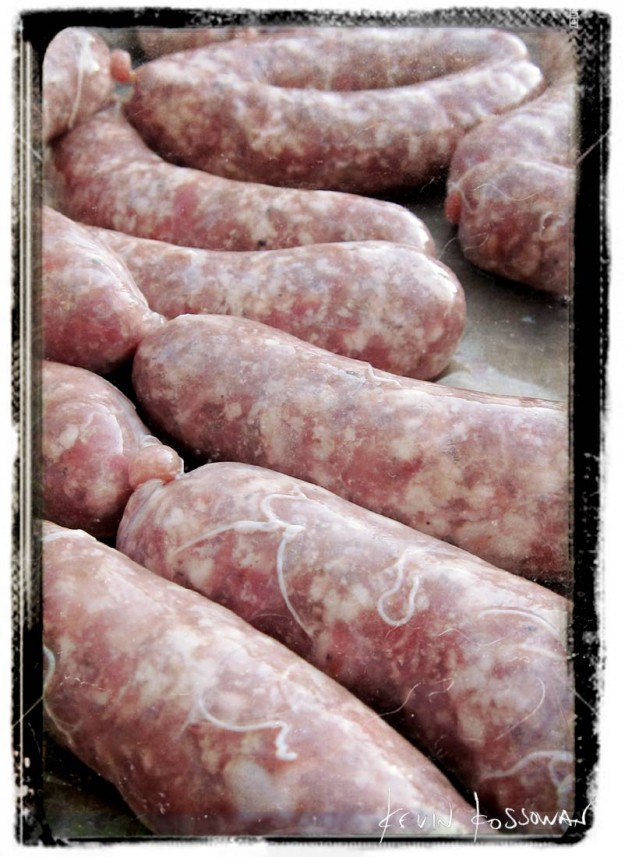