Having agreed to butcher an antelope as a favor to my dad, I found myself with an entire animal worth of cuts in my freezer. I had very little experience with it. Yen had never tried it. So clearly – clearly, it was time to do a multi-course tasting menu of Pronghorn Antelope.

I’ve been wanting to try something like this for a while with big game. Got a pan super-hot, and seared the seasoned meat quickly – as one might to tuna. The texture and flavor profile were exceptional. I seriously suggest trying this if you’re not averse to eating raw game. It’s delicious and delicate. The only downfall is that antelope proved to be so mild that the black peppercorns took over – so if you’re after tasting the animal, omit the pepper. If you just want ‘damn tasty’, I’d keep the pepper in. 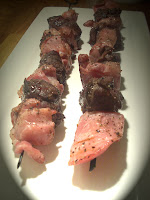 Seasoned, skewered, grilled on a griddle pan and finished in the oven. The ‘bacon’ style was extremely salty, which unfortunately dominated. Live and learn. In my opinion, neck requires a different cooking method [slow, low heat]. The big plus of this dish is that the neck/shoulder meat was far more flavored than the loin, and it tasted more like a grass fed beef than a big game animal. 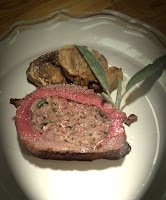 The concept was to introduce sage – a common wild herb where these animals live. So we stuffed the loin with de-cased sausage meat mixed with some sage leaves soaked in olive oil. The oil from that sage infusion became wonderfully grassy, and we coated the outside of the loin in it prior to pan-roasting the whole thing.

One of the shaggy parasol mushroom cap quarters was pan roasted with the meat. The other was done on high heat with butter, covered. The pan-roasted one was far inferior as it dried out a touch, which did nothing for the flavor or texture. I highly recommend opting for a moist cooking environement for these mushrooms.

Summary
I’m a fan. Antelope is extremely delicate, and since I go to great lengths to obtain delicate game, this went from off my radar to the top of my favorite game meats overnight. I currently hold that the mild flavor profile is diet related, as they presumably graze more than eat bark and slough grasses like moose or deer. If you don’t like big game, pronghorn antelope may convert you.

The wines: 2005 Chateau Puygueraud [needs 3-5 years at least], and 2005 Leon Beyer Riesling les Ecaillers – Fantastic minerality and complexity [had it for dessert]